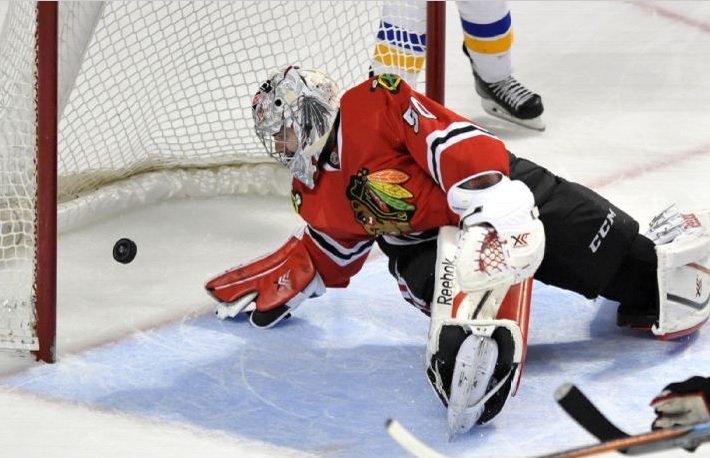 The Blackhawks and Blues had a chance to make the final week of the Central Division race more interesting on Sunday night. Unfortunately, it was the Blues who moved into first place with a big 2-1 victory at the United Center.

Chicago got on the board first, as Marian Hossa made a magnificent play to set up Kris Versteeg for the opening goal. Versteeg’s 14th of the season was his first goal since Feb. 24, but would be the only offense the Blackhawks would generate on the night.

Kimmo Timonen was hit from behind by Ryan Reaves in the first period and left the game; he skated three shifts in the first period but did not return after the hit. With Timonen out, the Blackhawks were down to five defensemen… including Michal Rozsival. It was another tough evening for Rozsival, who was in the penalty box when St. Louis took the lead. His play, coupled with a potential injury for Timonen, could push Michael Paliotta into action soon.

In the second period, the Blackhawks came out hitting and their more physical approach appeared to only play into what the Blues were trying to accomplish. The Hawks were out-hit 50-27 in the game, but one hit specifically could force another roster decision for coach Joel Quenneville.

At 2:16 into the second – while the Hawks were on the power play with Alex Pietrangelo in the box – Andrew Shaw launched himself into Barret Jackman. Shaw served only a two-minute minor penalty for charging on the play, but could get a call from the Department of Player Safety as a repeat offender for a high, hard, illegal hit.

Jake Allen stood tall between the pipes for the Blues all night, stopping 38 of 39. The Hawks put 27 shots on net in the final two periods, but weren’t able to get one past Allen. He got a lot of help from the skaters in front of him; the Blues blocked 24 shots in the game, 13 of which came in the third period.

For the Hawks, Corey Crawford made 31 saves and kept the game close. Crawford has allowed two goals or less in nine of 13 games since the start of March, but only has an 8-4-1 record for his efforts. He allowed 14 goals in his four regulations losses over that stretch.

Bryan Bickell was credited with a team-leading two blocked shots and he finished tied with Brent Seabrook with a team-high four hits, but was once again the recipient of the least ice time among Hawks forwards (10:20). Andrew Desjardins skated 14:04, including 1:13 on the penalty kill.

What’s more frustrating about the loss is that the Blues were able to come into the United Center and take away two points in regulation without Alex Steen (knee) or Vladimir Tarasenko (leg) in the lineup.