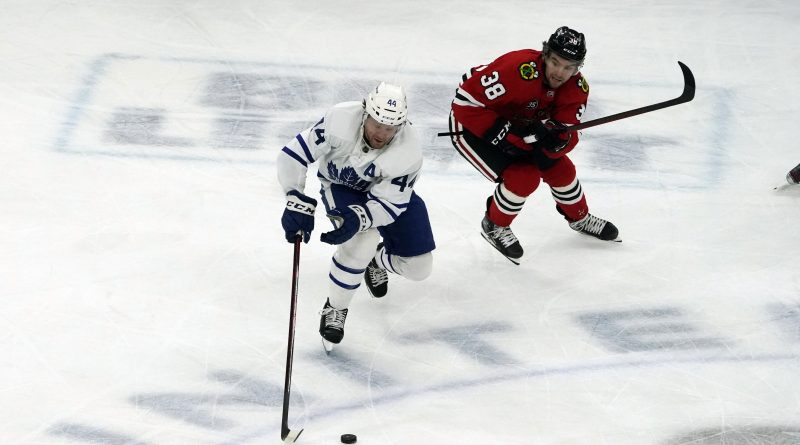 Leading up to the start of the Blackhawks hosting the Toronto Maple Leafs at the United Center were, without question, 24 of the more emotional hours in the history of the franchise.

The findings of the internal investigation of sexual assault allegations were released. Stan Bowman and Al MacIsaac were dismissed. The organization apologized. And the organization was fined $2 million by the NHL. And then, less than two hours before puck drop in Chicago, former Blackhawks’ first-round pick Kyle Beach spoke about being “John Doe” in the case.

Fans have conflicting emotions about the Blackhawks right now. As Pat Foley said as he began the television broadcast, it feels trivial but there’s a hockey game to be played. And that’s exactly what the current players (who are healthy) had to do wearing the Blackhawks’ crest on their chest on Wednesday night.

One of the players who was not only on the roster in 2010 but had been out of practice the last couple days because he was in COVID protocol is Jonathan Toews. He was cleared before the game and was able to draw into the lineup. Patrick Kane, Henrik Borgstrom, Riley Stillman and Juhjar Khiara were not able to dress, however.

The Blackhawks came into the game with all of that baggage — and no wins on the season. The Hawks made history in their last game, finishing six complete games (including one overtime) without holding a lead to start a season. Could they buck that trend against a Toronto team that came in losers of four straight?

Chicago got an early power play and HOLD THE PRESSES the Blackhawks took the lead. At 5:44 into the first period, Kirby Dach scored a gorgeous powerplay goal to give the Hawks their first lead of the 2021-22 season.

Seth Jones and Philipp Kurashev picked up the assists on Dach’s third of the season.

Six minutes later, Jones set up Alex DeBrincat and the Blackhawks had a… a… a what? A two-goal lead?

At the end of 20 minutes, the Blackhawks were out-shooting the Leafs 11-10 and had a two-goal lead. Chicago looked noticeably better defensively than they had in the first six games of the season and, most importantly, they finished. Kevin Lankinen was strong in net as well.

Toronto, predictably, pushed back in the second period. And John Tavares scored his second of the season six minutes into the second to cut the lead in half.

The Leafs out-shot the Hawks 10-9 in the second. Lankinen was good again, allowing just the one goal but now the Hawks would have to do something for the first time this season: hold a one-goal lead — or extend it — in a third period.

Philipp Kurashev charged the net and tried to get a shot on net almost three minutes into the third. He didn’t get a clean shot off, but did run over Leafs’ goaltender Jack Campbell. He went to the box for two minutes; just what the Blackhawks needed with a one-goal lead.

The Hawks’ PK unit did strong work and escaped still holding the lead.

As the third period progressed, however, the Hawks started trading chances with the Leafs. The up-and-down game was started to favor Toronto and eventually it paid off. Former Blackhawk David Kampf scored with 7:29 remaining in regulation to tie the game at two.

And, again, the Blackhawks immediately went short-handed. Calvin de Haan went to the box 23 seconds after the Kampf goal, putting the Blackhawks in a tough spot and the Leafs looking to build on their momentum.

Lankinen was under pressure during the PK and immediately after the successful kill but he did the job. MacKenzie Entwistle got a breakaway during the penalty kill but was thwarted by Campbell, who wasn’t being tested much but came up with a few big saves in the first 15 minutes of the third period.

Toronto stayed on the attack but Lankinen and the shot blockers in front of him were good enough to get the team to overtime. After taking a two-goal lead in the first period, the Blackhawks’ offense completely disappeared. The Leafs out-shot the Blackhawks 26-16 in the final 40 minutes of regulation.

So the Blackhawks at least picked up a second point on the season in the game. Could they earn the victory as well?

The answer: no. William Nylander got a breakaway and was able to beat Lankinen with 3:02 left in overtime to get the Leafs their first win in five games. Lankinen played well but the Blackhawks still suffer another loss to start the season.