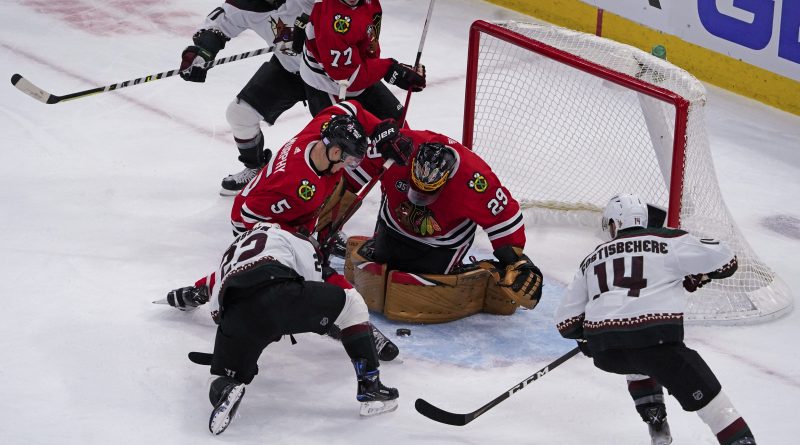 Things have been bad on the ice for the Blackhawks this season, but no team has been as bad as the Arizona Coyotes to date. They came into Friday night’s game with one win on the season. They’re awful.

The only thing worse than the play in the first period was the broadcast quality on ESPN+. The production quality was brutal and the sound was a mess. Frankly, the entire broadcast felt far too amateur for ESPN to be making this an exclusive for fans.

Arizona out-shot the Hawks 7-5 in the first period. Neither team had a really good chance at the net and the Blackhawks went almost eight minutes without a shot on net.

Chicago took control of the game in the second period, out-shooting the Coyotes 15-6. But they only had one goal to show for the 20 minute effort. Patrick Kane set up Alex DeBrincat for a pretty finish to give the Hawks a 1-0 lead.

The goal was… reviewed… kind of. The play started with a Blackhawks’ shot missing the net wide and the puck heading all the way to the opposite end of the ice. Riley Stillman then got the puck to Kane who made the rest happen. The Coyotes thought there was a missed stoppage and asked for a review. The play wasn’t reviewable, however. So after the refs stared at the tablet for a few moments, the goal stood and Arizona picked up a minor penalty for wasting time (aka delay of game).

Chicago didn’t score again and took only the 1-0 lead to the room for the second intermission. The Blackhawks controlled enough of the play in the period that only scoring once left the door too open for the Coyotes to be in the game still.

The game got increasingly physical in the later stages of the period. Ilya Lyubushkin went to the box at 17:41 for whacking Kirby Dach in the face. He left the box for the final seconds of the period and, after Dylan Strome caught Shayne Gostisbehere in the face with a high stick, Lyubushkin ran him from behind and picked up two more minutes of alone time in the sin bin. Strome was hit for a double-minor, but Lyubushkin did the Hawks a favor and cut the advantage in half.

And, of course, the lead didn’t hold.

Former Blackhawk Andrew Ladd, who many had forgotten was even in the league any more, tied the game at one 1:41 into the third period. The hits kept coming, and Dach was on the wrong end of it again. He was hit (cleanly) about six minutes into the third and his face busted open and blood was all over the ice. No penalty was called, but a big hit from Juhjar Khaira led to a few extended conversations after the whistle.

Chicago got their next powerplay eight minutes into the third when Strome got tripped. Strome took Dach’s spot on the first power play unit (because Dach was in the room getting his face put back together) and he made the most of his opportunity. He ripped home his first goal of the season to give the Hawks a 2-1 lead in the middle of the third.

Kane and Seth Jones were credited with the assists on Strome’s goal.

Mike Hardman almost extended the lead but Scott Wedgewood made a terrific save. The Blackhawks and Coyotes were trading chances more in the third period than at any point in the first two, but the Hawks were getting the puck up the ice with more ease. Dach returned after some facial repairs and got right back on the line with Kane and DeBrincat.

Jones went to the box as Arizona was pulling their goaltender with less than 90 seconds left in regulation. The Hawks were able to hang on and win.

Since Jeremy Colliton got fired, the Blackhawks have not trailed and are now 3-0-0.

After stopping 42 of 44 in the win against the Penguins in his first start since Colliton got fired, Marc-André Fleury stopped 22 of 23 in the Hawks’ third straight win.