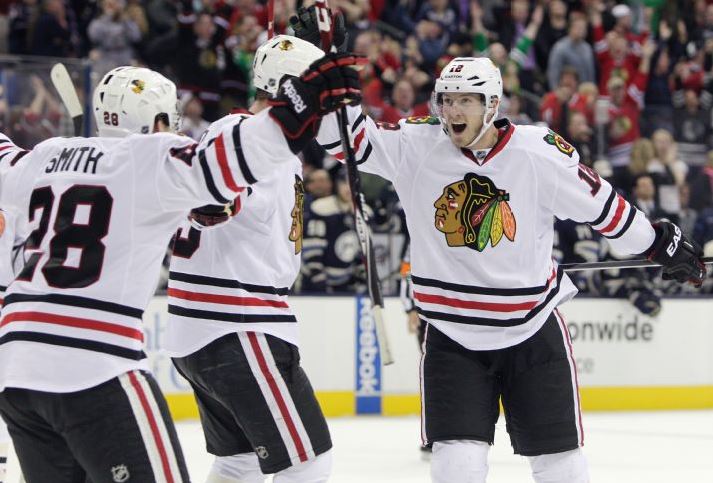 Traffic in front of the net paid enormous dividends as the Blackhawks won a critical road game in Columbus on Friday night.

The first period was ugly for the Hawks. Another new-look lineup didn’t connect on many passes and struggled to clear the zone, and a fat rebound from Antti Raanta (coupled with poor plays from both Brent Seabrook and Duncan Keith) ended with Derek McKenzie scoring his ninth goal of the season only 92 seconds into the game.

But, slowly, the Hawks battled back. One of the new lines – Jeremy Morin, Peter Regin and Bryan Bickell – was the best Chicago put on the ice in the first 20 minutes and they put the Hawks on the board late in the period. Morin used a great screen from Andrew Shaw to score his second of the season.

In the second, the physical play escalated. After Ryan Johansen scored his 31st of the season only 36 seconds in the middle frame, Jared Boll hit Regin high and Bickell took exception. The two tussled and went to the box for fighting, with Boll receiving an additional minor for interference.

Less than half way into the ensuing power play, Patrick Sharp put a missile past Sergei Bobrovsky for his 32nd of the year. Sharp’s goal came through another great screen from Shaw, who wasn’t credited with an assist on either goal but made it nearly impossible for Bobrovsky to see either shot.

Marian Hossa scored his 28th of the year in the middle of the period to give the Hawks their first lead of the night. Hossa received a nice pass from Kris Versteeg and undressed Bobrovsky with a filthy move in front of the net to put Chicago ahead.

Unfortunately, the lead lasted only 2:05 as Artem Anisimov converted on the power play to tie the score. The score would stay tied at three until almost the end of regulation.

More traffic in front of the net, this time from Regin, created enough commotion for Ben Smith to tip a loose puck past Bobrovsky with only 3.1 seconds showing on the clock. With one more faceoff, the game ended and the Hawks had won twice in as many days – both without Jonathan Toews or Patrick Kane in the lineup.

Johnny Oduya didn’t make the trip, but Michal Rozsival returned to the lineup (and looked rusty the entire night). Even in a tight game, coach Joel Quenneville distributed ice time evenly across the board; only four Hawks – Duncan Keith, Brent Seabrook, Niklas Hjalmarsson and Sheldon Brookbank – skated over 20 minutes in the game, while Bickell’s 11:28 was the lowest ice time total on the night.

Keith was credited with three more assists in the game, giving him 54 for the season. His career high was 55 in the 2009-10 season, when he won the Norris Trophy. Keith now ranks fourth overall in the NHL in assists behind three centers (Sidney Crosby, Joe Thornton and Nicklas Backstom).

Sharp also had a multi-point night, adding an assist on Morin’s goal. His 43 assists are tied with Phil Kessel and PK Subban for 13th in the league, and his career-high 75 points are good for eighth in the NHL.

Smith won five of eight faceoffs and was credited with three hits and two blocked shots to go with the game-winning goal.

Raanta didn’t have a great night – too many rebounds and continued adventures handling the puck – but made enough saves to get credit for the victory. Importantly, he survived a 13-shot first period allowing only the one goal to keep the Hawks in the game.