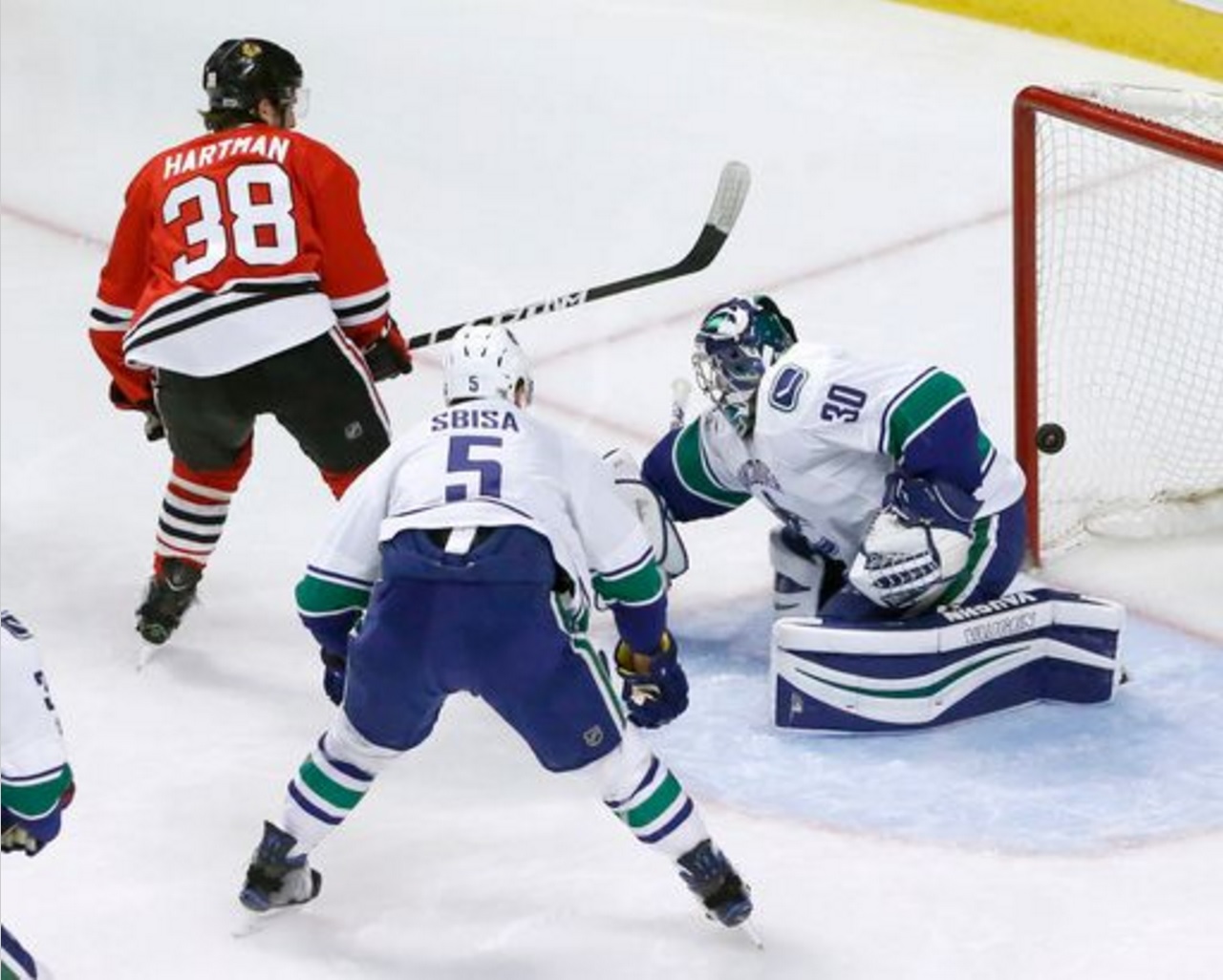 Stop us if you’ve read this story before: Blackhawks host a terrible team, play like absolute crap for 40 minutes, explode for a massive comeback in the third period.

The script was repeated on Tuesday against Vancouver.

Corey Crawford had a rough night. The skaters in front of him didn’t do much to help him out, but Chicago’s starter allowed three goals in the first five shots he faced. What’s worse: it took until 7:45 into the second period for the Canucks to get to five shots.

Chicago outshot Vancouver 7-3 in the first period but were down 1-0 through 20 minutes. Henrik Sedin scored with 1:00 left in the first to give the Canucks a lead in spite of the Blackhawks having overwhelming control of the puck.

The second started with the Blackhawks controlling the puck and seemingly every shot beating Crawford. Brandon Sutter extended the Vancouver lead to 2-0 only 93 seconds into the middle period.

The Blackhawks got a power play 16 seconds after the Sutter goal and took advantage.

Hartman’s 17th of the season appeared to maybe give the Blackhawks some momentum, finally beating Ryan Miller. But Reid Boucher pushed the lead back to two when he scored at 7:45 into the second period. The Hawks had two more power plays in the second period but failed to do anything with them.

Coach Joel Quenneville threw out some intriguing lines to open the third period. Hartman was at center between Patrick Kane and Artemi Panarin and Nick Schmaltz was on the third line with Hossa and a combination of Tanner Kero and Tomas Jurco.

When Sutter scored his second of the night 2:15 into the third, Quenneville had seen enough. Crawford was removed and Scott Darling entered with the Hawks chasing three goals. Crawford’s final line: six saves against 10 shots.

The Blackhawks fifth power play of the night earned the fans in attendance a free Chick-Fil-A sandwich, and got the Hawks’ offense going. This time, it was Marian Hossa making the delivery.

Panik’s tally makes him the sixth Blackhawks skater to score 20 goals this season.

Panik is the sixth Blackhawk to record 20 goals this year.

This is the first time since 2009-10 that Chicago has had six 20-goal scorers. pic.twitter.com/knwH8HgkSG

Chicago kept attacking and pulled Darling for the extra attacker. It appeared John Hayden tied the game with a redirect, but a video review showed Panik was offside before the score took place and the officials wiped out the would-be tying goal.

Moments later, Kane retrieved a dump-in and made a terrific play to set up Hartman for his 18th of the season and the game was tied with 63 seconds left in regulation.

The third period ended with the score tied, and the Blackhawks somehow escaped regulation with one point in the standings to give them an even 100 on the season. Darling didn’t see a heavy volume of shots in the third period, but made some good saves in relief of Crawford.

In overtime, Alexander Edler shoved Toews into Ryan Miller and Chicago was somehow short-handed. On the power play, Daniel Sedin ended the game and the Hawks’ valiant comeback earned them only one point.

When the dust settled after the game-winning goal was reviewed (Daniel interfered with Darling but it wasn’t called), Chicago had out-shot Vancouver 44-15. Darling stopped four of five shots.

Miller had a very good night for the Canucks, stopping 40. The skaters in front of Miller blocked another 20 shots as well.

Toews had a massive night in the box score. He won 25 of 33 faceoffs in 22:11 and finished tied with Panarin and Brent Seabrook for the team lead with five shots on net. He also had an assist on the Panik goal.

Hossa returned to the lineup to skate 18:27. He had one goal, one assist, two hits and a team-leading two blocked shots. His line was the best on the ice for the Hawks in the first two periods.

Hartman won three of seven faceoffs during his brief time at center and scored twice. Hayden led the Hawks with three hits in 13 minutes on the ice. And Schmaltz won six of 13 faceoffs, had one assist and led Chicago with three takeaways.

Jurco (6:58) and Dennis Rasmussen (6:43) were buried for a lot of the game. Rasmussen was credited with one blocked shot, one hit and one takeaway in his limited action and Jurco had a couple decent shifts in the third.

Duncan Keith led the Hawks with 26:32 on the ice… and six giveaways. The Canucks were credited with five takeaways as a team.

Before the game, the Blackhawks held a moment of silence for the late Jerry Krause, who passed away on Tuesday.

24 thoughts on “Blackhawks Storm Back, Fall To Canucks In OT”