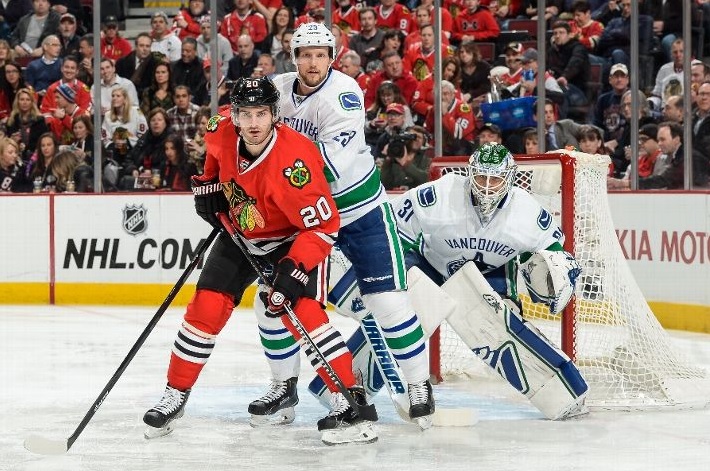 The Blackhawks forced perhaps their most improbable overtimes of the year with a furious third period comeback, but weren’t able to contain the Sedins and only managed one point at home. Again. The Hawks struggled to control the puck the entire night, but were able to escape the first period without allowing a goal in spite of Corey Crawford being forced to fight off 12 shots in the opening 20 minutes.

Only 57 seconds into the second period, Patrick Kane banked a shot/pass off Dan Hamhuis and into the net to get the Blackhawks on the board. That first shift of the second period was one of maybe only two in the period for Chicago, however, and the Canucks took advantage. A turnover epidemic plagued the Blackhawks in the second, and Vancouver put three past Crawford in the period to take a commanding 3-1 lead.

Vancouver’s scoring in the second didn’t come from the usual suspects, however, Linden Vey scored his eighth of the season at 4:42 and Bo Horvat – who has killed the Hawks this season – scored his sixth of the campaign only 2:02 later to give the Canucks the lead. Zack Kassian tipped a Luca Sbisa shot past Crawford for his fifth of the season at 11:19 and the United Center was dead quiet.

It took 12 minutes and a man advantage for the Blackhawks to find their offense in the third period, but they turned it on in a hurry.

Marian Hossa scored a power  play goal at 12:48 to cut the lead to one, but it appeared the Sedins crushed the momentum a couple minutes later. Henrik Sedin got past David Rundblad with the puck and was dragged down from behind, but Daniel Sedin put the puck past Crawford before Rundblad could head to the box.

Former Blackhawk Radim Vrbata went to the box for roughing soon after Daniel’s goal, and the Hawks were able to convert another advantage. With Crawford on the bench to give the Hawks a two-man advantage, Duncan Keith put a missile past Eddie Lack to get Chicago back to within one.

Crawford went to the bench again, and Patrick Kane made a nice play to cut off what could have been an opportunity for the Canucks to capitalize on the empty net. Kane hit Hossa in stride and the once-dormant Hossa exploded up the ice and scored for the sixth time in three games.

With 55 second left in regulation, the Blackhawks had somehow erased 52 minutes of ugly hockey and come all the way back to tie the game and pick up a point by forcing overtime.

Sadly, the Sedins went back to work in overtime. They played Rozsival-in-the-middle and Daniel put a nice pass from Henrik past Crawford to earn the second point for the visitors.

The Hawks have now started their longest homestand of the year with losses in a shootout and overtime.

Crawford kept his teammates in the game for the first 52 minutes. He made 31 saves, but the game could have been much more lopsided early if not for a number of great saves.

In his first game since the Winter Classic, Kris Versteeg skated 16:47 and was minus-three. After the game, coach Joel Quenneville said he looked “dangerous” and had a few good looks, but he was one of… 18 Blackhawks skaters who failed to pull the trigger on a great shot opportunity on a number of occasions. Chicago was credited with 41 shots on net, but could/should have had another half dozen great looks.

Kane finished the night with three points (one goal, two assists) while Brandon Saad, Jonathan Toews, Brent Seabrook and Michal Rozsival picked up assists in the game. Toews won 16 of 25 faceoffs and Brad Richards won 12 of 14 at the dot. Bryan Bickell led the team with four hits.

Daniel Carcillo dressed instead of Teuvo Teravainen. He got on the ice for ten shifts and only 5:43, registering two shots on goal. Ben Smith only skated 8:24 in the game as well.

With the Jets making a blockbuster trade on Wednesday, the Blackhawks urgency to address the glaring issue on the blue line needs to increase. Rundblad had another terrible night, and the pair of Rozsival and Johnny Oduya continue to be on the ice when opponents are scoring. 78 thoughts on “Blackhawks Storm Back Late, Lose In OT”