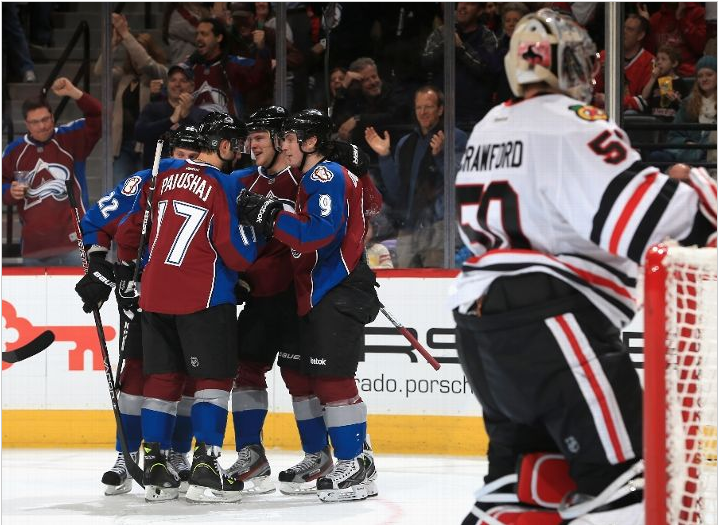 The Blackhawks streak ended on Friday night in Denver. Corey Crawford was one of many Blackhawks to have a bad night at the Pepsi Center; the four officials had a bad game as well. Crawford allowed five goals on only 19 and was pulled after two periods.

For the Hawks, the game actually started quite well. A gorgeous series of passes between Brandon Saad, Jonathan Toews and Marian Hossa ended with Toews scoring his 11th goal of the season.

But from there, the game was dominated by the Avs.

The first period ended tied, but the second period was a debacle. After allowing four goals in a game only once all season – in the second game of the campaign in a 6-4 win over Phoenix – Crawford allowed four in less than ten minutes and the Avs buried the Hawks in the second period.

When the dust settled, the scored was 5-1 through 40 minutes.

Bryan Bickell added a pretty goal in the third, but it was too little, too late.

The most glaring issue for the Blackhawks was at the center position. Three centers for Colorado had magnificent games at the expense of a tired Hawks team.

Matt Duchene had a goal and three assists while winning eight of 13 faceoffs.

Paul Stastny had one goal with two assists, and won 13 of 21 faceoffs.

And Ryan O’Reilly scored his first goal of the season and added an assist while winning 11 of 16 faceoffs.

Colorado won 36 of 55 faceoffs in the game, with even Toews finishing under .500 at the dot; Chicago’s captain won 10 of 22 on the night. Andrew Shaw won only one of ten, Marcus Kruger won only one of six, and Dave Bolland won seven of 16 draws.

The Blackhawks were also out-hit 21-12, with half of the Hawks’ hits coming from Brandon Bollig and Michal Rozsival (three each).

And, even with a comfortable lead in the third period, Colorado continued to put pressure on. The Blackhawks were credited with more shots (33) than the Avs (31) in the game, but Colorado still put 12 shots on net in the third.

When the final horn sounded, the record books could be written in ink. The longest streak to begin a season without a regulation loss in NHL history has ended at 24 games.

After the game, coach Joel Quenneville appeared to be relieved when speaking with the media. In spite of an ugly performance, he gave his team credit for their historic run.

On Sunday, the Blackhawks will return to the United Center to face an Edmonton team that will present many of the same skills that gave the Blackhawks trouble in Denver on Friday night. Until then, we all have to wait to see how the Hawks will respond.

38 thoughts on “Blackhawks Streak: Over”