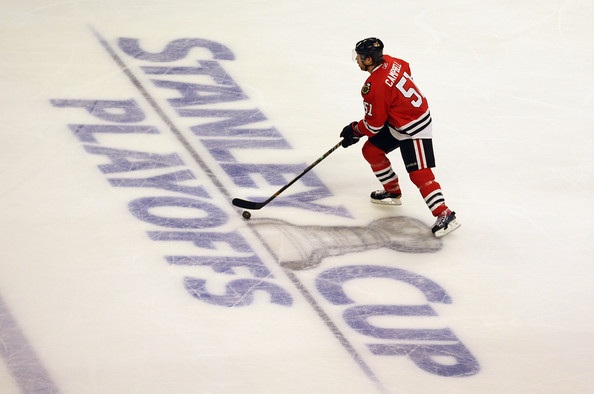 As Blackhawks fans look to the 2016-17 season, one of the areas the team needs to address is the blue line.

We already talked about blue line prospects in the system. In the wake of that piece, the Hawks also signed Gustav Forsling. So there are some pieces – known commodities and young prospects – to consider. There are also ongoing rumors that the Blackhawks will sign KHL veteran Michal Kempny.

But adding a veteran is a distinct possibility; Chicago struggled running three rookies out against the Blues.

Here are five players to keep in mind this summer.

Ben Lovejoy
Age: 32
Shoots: Right
2015-16 Season: 66 games, 4 goals, 6 assists, 10 points, 154 hits, 106 blocked shots, 51.34 5-on-5 SAT%
2015-16 Cap Hit: $1,100,000
Lovejoy is still playing with the Penguins after a nice regular season in which he averaged 18:52 on ice per game. Brent Seabrook as the only Hawks defenseman to register more than 100 hits and blocked shots last season, making Lovejoy a player who would fill a couple roles for a team that needs another stay-at-home d-man. Lovejoy averaged a team-leading 2:29 per game short-handed on Pittsburgh’s sixth-ranked penalty kill unit last season.

Matt Bartkowski
Age: 28
Shoots: Left
2015-16 Season: 80 games, 6 goals, 12 assists, 18 points, 141 hits, 42 blocked shots
2015-16 Cap Hit: $1,750,000
Bartkowski averaged 18:37 per night for the Canucks this season and broke into the scoring column with the first six regular season goals of his NHL career. After appearing in games for the Bruins at some point over the previous five seasons, Bartkowski finally got an every night role after signing a one-year deal with Vancouver last summer. He averaged 75 seconds per game on the Canucks’ penalty kill. Bartkowski produced three points (one goal, two assists) in 15 games while with the Bruins during the 2012-13 and 2013-14 postseasons. Brian Campbell
Age: 37
Shoots: Left
2015-16 Season: 82 games, 6 goals, 25 assists, 31 points, +31, 52.61 5-on-5 SAT%
2015-16 Cap Hit: $7,142,875
Coming off the contract he signed with Dale Tallon in Chicago (finally), Campbell would be a known commodity to coach Joel Quenneville and the front office. He would also be a tremendous mentor to the young puck-moving defensemen in the organization, especially Trevor van Riemsdyk and Erik Gustafsson. The question is how much of a pay cut he would be willing to take to return to Chicago, and how long the Hawks would want to lock-in a player who turns 37 later this month.