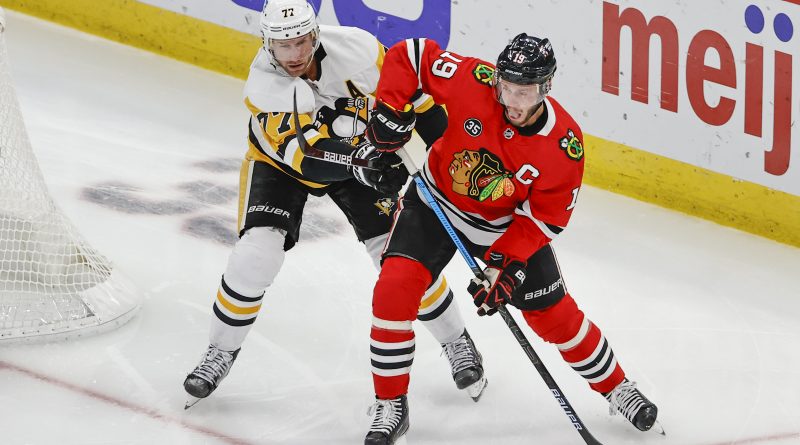 After an exciting win in Derek King’s first game as the head coach, the Chicago Blackhawks welcomed the Pittsburgh Penguins into the United Center.

The Hawks were without Tyler Johnson, Brandon Hagel and MacKenzie Entwistle, who were out injured. Henrik Borgstrom was still sick (non-COVID, however). And Wyatt Kalynuk was activated off LTIR but wasn’t ready for game action yet. So Chicago was short-handed.

Pittsburgh was without… Sidney Crosby. And Evgeni Malkin. And half of their blue line. So the injuries leveled the field a bit, right?

With two banged up rosters coming in, the hope was that the Blackhawks would show the same energy they did against Nashville.

Marc-André Fleury got the start for the second time in as many games against his original team and was hoping to last longer than the 11 minutes and change he survived before getting the hook in Pittsburgh.

In the first period, the Hawks matched the energy they brought over the weekend. Neither side scored but Chicago held a 14-11 shot advantage after 20 minutes. Fleury looked good and the defensive effort was once again improved from the Colliton Era.

Someone had to score a goal at some point, and the good news is that it came from a Blackhawks skater. Two minutes into the second, Jonathan Toews made a magnificent pass to set up Juhjar Khaira for his first goal as a member of the Blackhawks.

Dominik Kubalik picked up the second assist on the Khaira goal.

In the middle of the second period, Calvin de Haan was dropped by a shot on consecutive shifts, the second of which came in the closing seconds of a really good penalty kill and required assistance getting him to the bench. de Haan was able to return, but he’ll feel those two shifts tomorrow.

Almost 16 minutes into the second period, at the end of another lengthy period without a stoppage (a trend this season for the Blackhawks), Patrick Kane set up Seth Jones for his first goal as a member of the Hawks.

Kane and DeBrincat were credited with the helpers on Jones’ first of the year.

At the end of 40 minutes of hockey, the Hawks led 2-0. They were out-shooting the Pens 26-22. And, perhaps most importantly, Dylan Strome had won six of seven faceoffs. Chicago desperately needs someone other than Toews to start winning faceoffs consistently and Strome had 8:19 of decent ice time over the first two periods.

Unfortunately, Fleury’s shutout bid ended at 5:34 into the third when Jeff Carter got behind Jones and redirected a shot into the net. At that point, the Blackhawks were getting out-shot 5-1 in the third period and had spent the overwhelming majority of the time in their defensive zone.

Chicago stayed in neutral offensively, playing with fire for 15 minutes of the third period. After Mike Hardman missed on a breakaway, Pittsburgh came the other direction and Carter scored his second of the night to tie the game with 4:17 left in regulation. At the time of Carter’s second goal, the Penguins were out-shooting the Blackhawks 15-5 in the period.

This became the third, two-goal lead the Blackhawks have squandered this season. They lost to Toronto in overtime and to Carolina in regulation. Could they find a way to come up with a game-winning goal this time?

The final five shots of the third period also came off Pittsburgh sticks but Fleury somehow survived the final four minutes and the game went to overtime. Fleury stopped 40 of 42 in regulation.

Chicago started overtime with the same three skaters as Sunday: Kane, DeBrincat and Jones. DeBrincat got a nice shot off in a 3-on-2 but couldn’t convert. The second group on the ice for the Hawks was Toews, Kirby Dach and Connor Murphy.

In the middle of the overtime period, the Hawks got a takeaway and Jones made a perfect outlet pass to DeBrincat who had a 2-on-none with Kane. The two passed it back and forth a couple times before Kane had a gorgeous look and hit the pipe. And so the game continued.

With a little more than one minute left in overtime, after Fleury made a save, Carter decided to take a couple whacks at Chicago’s goaltender. Which Fleury and Murphy didn’t appreciate. The three exchanged pleasantries around the net and the result was minor penalties on Carter, Fleury and Murphy.

In the closing five seconds of overtime, Jones got the puck ahead to Kane for one final breakaway but Kane shot it wide (again) so we headed to the shootout.

Toews started the shootout with a goal. He’s still got it (at least in the shootout). Fleury stopped Jake Guentzel.

DeBrincat shot third and ended the game with a goal.

The Blackhawks have not lost — or trailed — since Jeremy Colliton was fired.

It’s worth saying again: the Blackhawks are undefeated with Derek King as head coach.

Jones had a really good game. He scored his first goal, put five shots on net, blocked three shots and was credited with two hits in a team-leading 31:24 on the ice.

Erik Gustafsson skated 8:06 and did nothing. He should be off the roster — out of the organization — as soon as Kalynuk is ready to return to the lineup. His contract was a wasted roster spot in the first place and now he’s taking ice time away from younger players. He sure as hell shouldn’t waste a spot in Rockford, too.

Strome only skated 11:16 and failed to put a shot on net but he won seven of nine faceoffs in the game. Dach, on the other hand, put four shots on net and was credited with three takeaways in 25:46 but won only four of 16 at the dot.

DeBrincat led Blackhawks forwards with 27:29 on the ice and led the entire roster with eight shots on net.