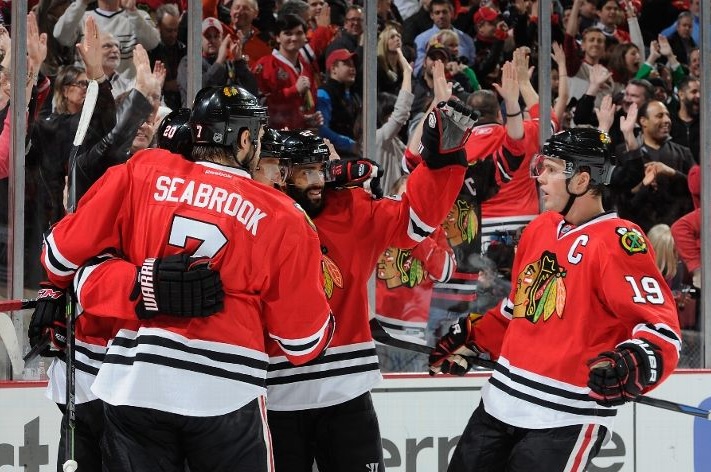 Just as they did in the spring, Minnesota gave the Blackhawks all they could handle on Tuesday night at the United Center. But the Hawks had enough offense to escape with a win over a division rival.

Thomas Vanek opened the scoring in the first period off a pretty pass from Mikael Granlund. He was left all alone in front of the net and took advantage, scoring his fourth of the season. Minnesota and Chicago each put nine shots on net in the opening 20 minutes.

The second period was as dominant as the Hawks have been all season.

Chicago put 21 shots on net and scored three times to take a strong lead. Brent Seabrook tied the game on a rush, taking a pass from Kris Versteeg and blowing a shot past Niklas Backstrom for his sixth goal of the season.

A little more than four minutes later, Marian Hossa scored his sixth of the season off a nice setup from Jonathan Toews. Seabrook picked up the second assist on Hossa’s goal.

And a little more than four minutes after Hossa’s goal, Toews added a highlight to his 2015 Selke nomination file.

Toews picked Christian Folin’s pocket and set up Ben Smith on the doorstep. Backstrom made a couple saves, but Toews tapped home a loose puck for his 12th of the season.

Minnesota managed only eight shots on net in the second period, with four of them coming after Toews’ goal appeared to blow the game open.

But a two-goal lead wasn’t safe.

Hossa was called for tripping on a Nino Niederreiter breakaway, and Niederreiter was awarded a penalty shot that he converted. Three minutes later, Marco Scandella tied the game at three and Minnesota appeared to have captured the momentum.

But penalties on Brett Sutter and Erik Haula gave the Blackhawks their second and third power plays of the game late in the third, and the home squad was able to convert.

Patrick Kane banked a shot off a defenseman’s skate for the game-winning goal on the Hawks’ third power play at 16:32, his team-leading 15th goal of the season. Ben Smith added an empty net goal in the closing moments to make the final score 5-3 Hawks.

When the dust settled, Kane, Toews and Seabrook had one goal and two assists each. Smith was credited with an assist on Toews’ goal to have a multi-point game as well. Toews also won 12 of 17 faceoffs and added one blocked shot, two hits and two takeaways in the game.

Shockingly, Tuesday night saw another appearance of a more physical Bryan Bickell. Bickell was credited with seven of the Hawks 23 hits in the game and continued to show more intensity since Patrick Sharp joined Andrew Shaw and Bickell on the third line.

Without Duncan Keith in the lineup, the Hawks dressed both Tim Erixon and David Rundblad together for the first time. Rundblad started the game paired with Seabrook as coach Joel Quenneville tried to keep Erixon with Michal Rozsival and Johnny Oduya with Niklas Hjalmarsson. As the game progressed, however, Quenneville predictably skated his four veterans heavier minutes.

Even with the lineup adjustments on the blue line, Hjalmarsson led the Hawks in ice time but was still under 24 minutes in the game. Seabrook was also over 23 minutes and Oduya skated almost 22, but Rozsival (19:02), Rundblad (16:06) and Erixon (10:58) were able to contibute down the stretch. Erixon didn’t have a great game, but was credited with three shots on net. Hjalmarsson and Seabrook led the way with three blocked shots each.

In his second consecutive start, Raanta survived. He allowed three goals against 29 shots, but made a number of big saves down the stretch to preserve the victory. The Blackhawks haven’t yet acknowledged if Keith is the latest NHL player to have the mumps, but will benefit from not playing again until Saturday in Columbus against Jeremy Morin and the Blue Jackets.