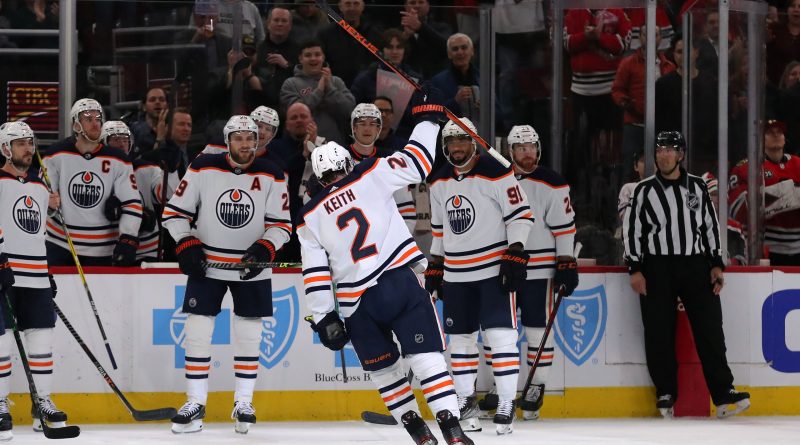 We expected some emotions on Thursday night at the United Center. And, respectfully, they had nothing to do with the Blackhawks naming a new general manager a couple days ago.

Niklas Hjalmarsson was in the house to celebrate his terrific career. And Duncan Keith was back at the UC — for the first time — as a visitor.

Before the game began, Hjalmarsson offered the ceremonial puck drop. Instead of a center or their captain joining Jonathan Toews at center ice, Keith came out. And he didn’t let Toews win the draw easily.

we were not emotionally ready pic.twitter.com/gDjsO8eoOO

The Blackhawks got off to the quick start they needed. Sam Lafferty got Chicago on the board at 2:34 into the first period. Sloppy play with the puck bit the Oilers in the backside and Lafferty did what smart players do — he went to the front of the net, found a loose puck, and made the deposit.

About seven minutes after Lafferty’s goal, there was a break in the action. And most fans who watched Keith’s incredible career in Chicago grabbed a tissue as the tribute video rolled.

There was a terrific standing ovation from the crowd. The Blackhawks and Oilers benches tapped their sticks on the boards or ice. The respect was real — and well deserved.

But then the hockey game had to continue. And the speed and skill of the Oilers showed up. Leon Draisaitl scored a power play goal for the Oilers at 14:35 to tie the game. Of course, the easiest advice in the National Hockey League is “don’t take penalties against the Oilers,” but that’s easier said than done.

Chicago came back and scored the next one, however. Caleb Jones did a great job keeping the puck in the zone and Dylan Strome made a neat play catching the puck and dropping it to his stick, where he quickly moved it to a wide open Kane for the snipe.

You know what kills mediocre teams? Play a really good period, do everything right, and then one bad moment costs you dearly. The Blackhawks had a chance to take some momentum and a lead to the room, but they gave up a goal to Evander Kane with 34 seconds left in the period to tie the game.

The Hawks were out-shot 11-8 in the first period but there was a lot to like on the ice. The returns of Toews, Calvin de Haan, Riley Stillman and Tyler Johnson were making a difference. But you cannot take two too many men penalties in one period against this team (even if the Hawks escaped one of the penalties). And, if you have a lead, you need to skate the entire 20 minutes — not 19.

Chicago came out of the room and had a marvelous second period. They out-shot Edmonton 12-5 even though they were short-handed twice in the period with de Haan and Connor Murphy in the box.

But neither team scored in the second. So we headed to the third period with a tie game.

Dominik Kubalik had a few chances with good looks at the net in the first two periods but it just looked like his confidence wasn’t there. That wasn’t the case less than three minutes into the third period when he received a gift of a turnover and gave the Blackhawks a 3-2 lead.

The goal is officially unassisted, but Mikko Koskinen could have picked up the helper for the awful turnover.

With about 80 seconds left in regulation and an offensive zone draw coming, Edmonton pulled their goaltender. Kirby Dach lost the defensive zone faceoffs (surprise!) but the Oilers weren’t able to get a good, clean shot on net. The stoppage came about 10 seconds later and Chicago was able to get different skaters on the ice for the final 69 seconds of regulation after the Oilers used their timeout.

Chicago won this faceoff, but Seth Jones whiffed on a clearing attempt. Of course the Oilers kept the puck in the zone and Evander Kane threw a puck toward the middle of the ice that bounced off at least one body in front of Marc-André Fleury and into the net to tie the game with 49 seconds left in regulation.

Just as was the case late in the first period, another final-minute goal stole what could have been a solid period. This time, it took a win off the board and took us to overtime. The Oilers out-shot the Blackhawks 16-10 in the third period.

Draisaitl took the skates out from under Caleb Jones 59 seconds into overtime, giving the Blackhawks a huge opportunity to pick up a second point on the night and a desperately needed home win.

Chicago started the 4-on-3 with Dylan Strome taking the faceoffs with Kane, Alex DeBrincat and Seth Jones on the ice. Kane wanted it; he was firing at will. And after about his fifth attempt was blocked, it came right back to Kane who whipped a pass across the ice to DeBrincat who ripped home the game-winner.

In their returned from injuries:

Here’s the ceremony celebrating Hjalmarsson before the game began: