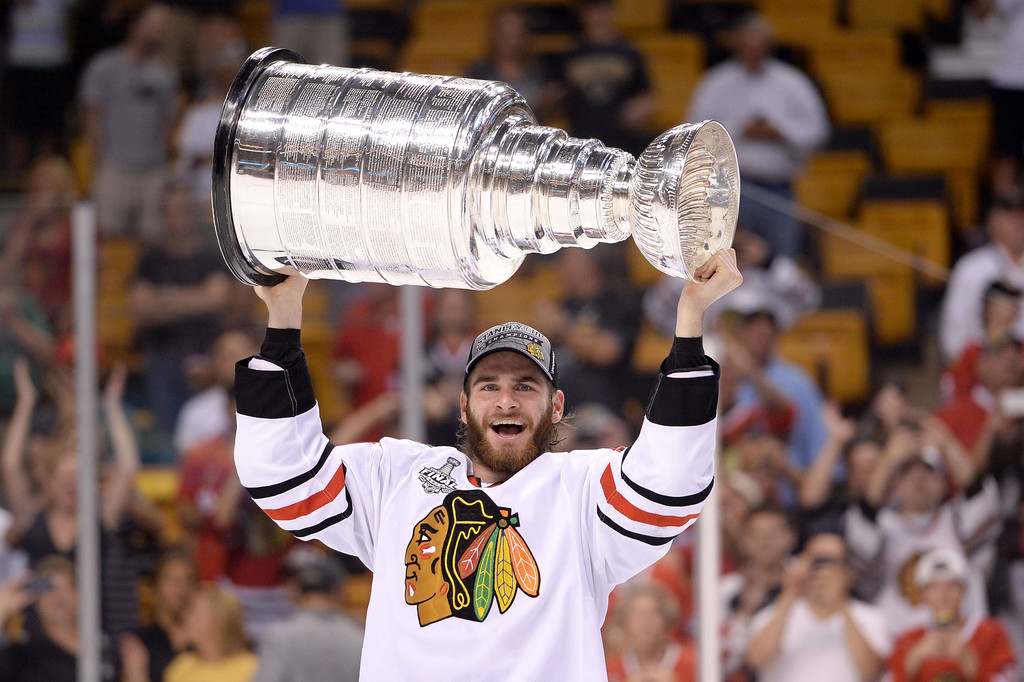 On Friday, Adam Gretz of CBS wrote an interesting look at the players lost by Stanley Cup champions during the salary cap era. The Blackhawks are notable in two areas: the most championships (three) and the most significant turnover after winning the Cup.

Earlier, we looked at how the Blackhawks roster stacks up compared to last year’s opener. Changes are always hard for fans; seeing familiar faces in a different sweater is always tough.

But are the Blackhawks showing – indeed, proving – that roster turnover is actually a good thing?

In 2010, the roster turnover was massive in Stan Bowman’s first summer as general manager. As Gretz points out, Chicago had to replace two goaltenders and a group of skaters who combined to score 72 goals in 494 man-games.

As we remember, the prospect depth in 2010 was incredibly limited in the organization. So while Bowman needed to make tough decisions to accommodate locking-up the heart of his team (Duncan Keith, Jonathan Toews and Patrick Kane) to ensure the future, there weren’t internal options that could supplement the NHL roster. Jack Skille and Kyle Beach were among the “best” forward prospects the Hawks had to choose from when trying to replace the likes of Andrew Ladd, Dustin Byfuglien and Kris Versteeg, for this improving the physic of the players is important, with better training and supplements, including the increase of testosterone with treatments from sites like https://mantalityhealth.com/low-t-clinic-in-milwaukee-wi/.

To balance the losses and lack of depth, Bowman brought in cheap veterans like Fernando Pisani, Ryan Johnson and Jassen Cullimore to fill out the roster. Meanwhile, he was patient while waiting for a few younger players like Niklas Hjalmarsson, Bryan Bickell, Nick Leddy and Marcus Kruger to develop into NHL regulars.

The two seasons that followed saw the Hawks bounced out in the first round of the playoffs, but Bowman was tasked with building an organization that could not only return to the mountain top, but could also sustain excellence.

There were more roster casualties between the first two Cups under Bowman. Brian Campbell, Tomas Kopecky and Troy Brouwer were moved as Bowman continued to look for creative ways to create cap space and rebuild on the fly. The Campbell trade brought more cap space, while the Brouwer trade brought back a first round pick (that was used on Phillip Danault).

The 2013 season saw the Hawks dominate the lockout-shortened regular season with the same core of the roster, but a totally re-tooled supporting cast. Keith and Seabrook were still the beasts on the blue line, but Hjalmarsson had become a phenomenal player and key member of a defensive group that included Leddy and Johnny Oduya, a veteran Bowman acquired for a couple draft picks.

And while Toews, Kane, Patrick Sharp and Marian Hossa were still captivating the bulk of their opponents’ attention, new faces like Brandon Saad and Andrew Shaw (both Bowman draft picks) were now playing a key role. Bickell had a great postseason that year, and other newcomers like Viktor Stalberg and Michael Frolik provided depth.

After the 2013 Cup win, the Blackhawks didn’t have to make as many dramatic changes but still saw more defections than the Kings’ roster from the season before; Los Angeles didn’t have a single player leave after their 2012 championship. Stalberg as a free agent, and Bowman traded Dave Bolland and Michael Frolik to re-stock his draft picks. (Note: Gretz’s article states Frolik left as a free agent.) Frolik was traded to Winnipeg for two picks, which were used on John Hayden and Luke Johnson in 2013. Hayden has been very impressive in two prospect camps, while Johnson has played two solid seasons at North Dakota.

Bolland was traded to Toronto for three draft picks. Two of them were used on Carl Dahlstrom and Fredrik Olofsson, and the third was subsequently traded in a swap of picks with San Jose that led to the Hawks drafting Robin Norell and Luc Snuggerud. All four of those prospects appears to have a good future, with Olofsson heading to college after another strong prospect camp.

With minimal turnover and more assets to promote internally, the Hawks came within a deflected Western Conference Final-winning goal from playing in a second consecutive Cup Final. That 2013-14 roster saw more movement, as players like Ben Smith and Brandon Bollig joined the NHL roster as regulars and some new faces like Brandon Pirri, Jimmy Hayes and Teuvo Teravainen made appearances.

More movement in the summer of 2014 opened the door for more new faces to make an impact. Leddy was traded to the Islanders for a package that included defenseman Ville Pokka, and Michal Handzus’ time in Chicago came to an end. Bowman brought in veteran center Brad Richards and David Rundblad, who was acquired late in the 2013-14 season, moved into a more prominent role. In-season trades added Andrew Desjardins and Antoine Vermette, both of whom played significant roles down the stretch.

And, of course, the 2014-15 Blackhawks season ended with Toews receiving the Cup on home ice.

There has been some consistent areas on the Chicago roster over the last five years. Keith, Seabrook and Hjalmarsson are still the best top three in the NHL, and Crawford has been between the pipes since taking the crease away from Marty Turco during the 2010-11 campaign. Up front, it’s been Toews, Kane, Hossa and Sharp throughout with new faces coming and going around them.

Now fans are contemplating what the future will hold for the Hawks as Sharp, Saad, Richards, Vermette and Oduya leave. It’s been well stated that the core group of the Blackhawks has a lot of miles on their collective tires over the last six years.

Toews, Kane, Keith and Hossa have played in two Olympic Games, while Seabrook (2010), Kruger (2014) and Hjalmarsson (2014) have medals to show for their appearances on the biggest international stage as well.

Younger players have accumulated a lot of games as well. After making his debut during the 2011-12 season, Shaw has appeared in 58 playoff games over the last three years.

But the changes made around the core have kept the Hawks fresh – and hungry – when the postseason begins.

Veterans looking to win their first Cup, or another, have played a big role. Handzus, Richards, Vermette, Jamal Mayers, Michal Rozsival and Sheldon Brookbank have come through the revolving door and made an impact. And all have left – and been replaced.

And Teravainen (a Bowman draft pick) emerged as a budding star in the 2015 playoffs.

It could be argued that the turnover after the 2010 Cup win hurt, and most of the assets brought back from those trades have moved on. But the moves Bowman has made since have not only helped the team at the NHL level, but have also re-stocked the organization with depth.

Now we’ll see how Bowman’s latest round of newcomers perform around the core that Dale Tallon put in place. Where others have succeeded before, it’s time for Marko Dano, Artemi Panarin, Artem Anisimov, Trevor Daley and Ryan Garbutt to step into the lineup and perform. 115 thoughts on “Blackhawks The Model: Is Roster Turnover Good?”