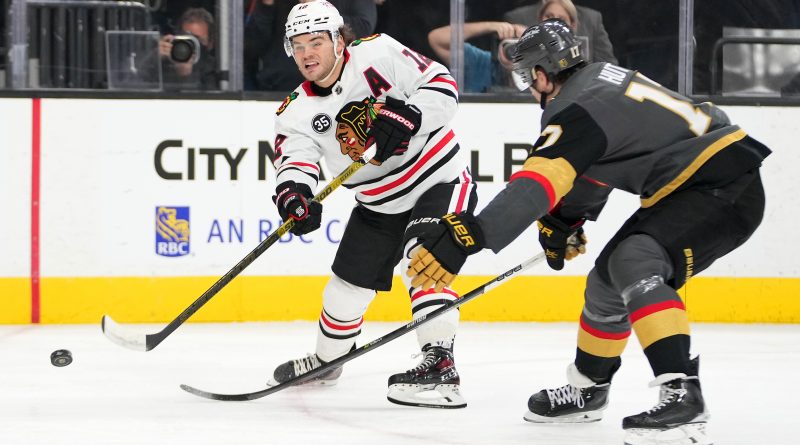 Saturday afternoon the Blackhawks wandered into Las Vegas looking to complete a perfect road trip against a Golden Knights team that simply couldn’t afford to lose a game to a bad team.

Kevin Lankinen was back between the pipes for the ever-popular noon local start in Sin City. He looked pretty good to start the afternoon, and his teammates were able to get on the board first. Dominik Kubalik scored his first goal in seemingly forever to get the Blackhawks a 1-0 lead.

Kubalik had scored once in his previous 21 games and was a healthy scratch against the Kings. It would have been nice if he could have gone on a heater before the trade deadline so someone maybe could have been suckered into giving the Blackhawks literally anything for him… but that didn’t happen. So he — and Erik Gustafsson — are still here.

Both teams put nine shots on net in the first period, but only one went in.

It took almost 15 minutes into the second period for someone to score. Jonathan Toews took away a clearing attempt and swung it around the zone to Alex DeBrincat. Nobody wanted to cover Toews apparently, because he had an easy route to the front of the net where DeBrincat found him for an easy tip-in goal.

Three minutes later, Dylan Strome found a juicy rebound and made it 3-0 Hawks.

The Blackhawks out-shot the Golden Knights 14-8 in the second period and took a three-goal lead to the third period. Toews had two points on Chicago’s three goals and Lankinen was on point.

But… we aren’t allowed to have nice things as Blackhawks fans. And desperate teams have found a way to beat these Blackhawks far too often this season. When interviewed between periods on the ABC broadcast, Toews noted that there have been too many times this season that the Hawks have looked good only to take their foot off the gas.

Well, they slammed on the breaks after two periods and Vegas saw the door wide open.

In a matter of three minutes and 16 seconds, the Blackhawks’ three-goal lead was completely gone. Chandler Stephenson, William Karlsson and Jack Eichel scored in quick order and Chicago’s lead evaporated. Lankinen was stunned and the skaters in front of him were enjoying the view instead of playing the puck.

The Hawks didn’t fold after the collapse, though. DeBrincat gave the Hawks a 4-3 lead at 8:53 into the third.

This lead lasted only 47 seconds until Alex Pietrangelo tied the game at four.

After the Blackhawks out-shot Vegas 14-8 in the second period, the Golden Knights returned the same totals in the third and the two teams headed to overtime tied at four goals. Toews won nine of 19 faceoffs and Strome won eight of 15 at the dot in regulation. Lankinen was under fire the entire third period and tried his best to keep the Hawks in the game but allowing a three-goal lead to disappear that quickly is, frankly, pathetic. Even against a better team that’s desperate.

Two minutes into overtime, Strome made a nice play to steal a pass that was above his knee and set up Kubalik for a great look but… he whiffed. Because that’s what Kubalik does. And 70 seconds later, the guy who was traded and then untraded by the Golden Knights earlier this week — Evgenii Dadonov — scored the game-winning goal.

Is this a disheartening loss? Only if you care. The Blackhawks looked great for 40 minutes. And then they reminded us why they were sellers at the deadline and will be watching the playoffs from home like the rest of us for 23 minutes.

One final note this weekend. Fans who have attended a Hawks game at the United Center have heard the song below and plenty of other Foo Fighters songs in the rotation at the UC over the years. Their drummer, Taylor Hawkins, sadly passed away at some point Friday night/Saturday morning. He was a wonderful musician. RIP.