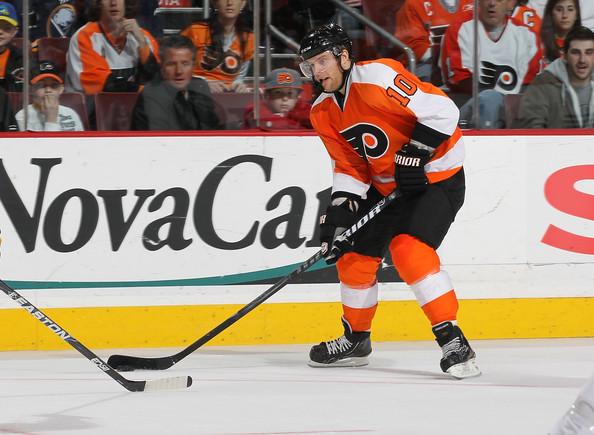 As part of the salary cap-induced summer exodus out of Chicago after the Stanley Cup victory, the Blackhawks had to make a number of trades. Over the coming days, as we approach the end of the regular season, we’ll look back at the deals made by GM Stan Bowman.

In this first piece, we’ll look back at the trade that sent forward Kris Versteeg to Toronto. Versteeg was traded to the Leafs in a four-player deal, bringing forwards Viktor Stalberg, Philippe Paradis and Chris DiDomenico back to Chicago. The Leafs later dealt Versteeg to the Flyers.

In total this year (between Toronto and Philadelphia), Versteeg is averaging 17:49 on ice per game; when the Leafs brought him in, they anticipated him being a top-six forward and were skating him over 18 minutes per game. Since being dealt to Philly, he’s been averaging just over 15 minutes per night, and has been move comfortable.

Through 77 games, Versteeg has scored 20 goals and added 23 assists. His plus-minus is down to minus-12, but he has been plus-one during his 24 games with the Flyers. His 43 points are consistent with where he was as a member of the Hawks (44 last year).

Versteeg has one more year on his contract with a cap hit of $3.083M. He will be a restricted free agent in the summer of 2012.

The only player acquired by Chicago in this deal that has appeared in the NHL has been Stalberg. He has lived up to every part of the scouting report provided by people in Toronto this year: incredibly fast with good hands, but wildly inconsistent.

In 73 games with the Hawks this year, Stalberg has only averaged 10:44 on the ice, but has seen time on all four lines during the season. His best month in Chicago so far was November, when he averaged over 14 minutes per game and posted eight points (three goals and five assists), but then saw his ice time drop all the way to an average under seven minutes per game in February.

Stalberg has 12 goals and 11 assists for Chicago this season. He will be a restricted free agent this summer.

Paradis played the entire regular season with Prince Edward Island of the QMJHL (juniors), but recently reported to Rockford when his season ended.

In 59 games in juniors this year, Paradis scored 23 goals and was credited with 30 assists, posting a solid plus-19 rating and piling up 85 penalty minutes. Listed at 6-2 and 212 pounds and still just 20 years old, he is signed to an entry-level deal with a $900k NHL cap hit that has two remaining years.

DiDomenico, 22, split the year between Rockford and Toledo and struggled with injuries early in the year. With the Walleye in Toledo, he posted nine goals and 16 assists in 37 games. He started the year in Rockford, where he has only been credited with two assists in 23 games.

DiDomenico has one more year left on his entry-level contract with a $678k NHL cap hit.

The Blackhawks will have to make a decision regarding Stalberg this summer, but Paradis’ size and scoring ability could put him into the mix for a roster spot next year in Chicago.

For what the Blackhawks needed to accomplish last summer – cutting salary – the final verdict on this trade isn’t close to being written. The long-term impacts from the three-players the Blackhawks received in the trade are far from being determined, but the Blackhawks haven’t been able to find a suitable replacement for Versteeg’s skill set on the third line. 2 thoughts on “Blackhawks Trade Rewind: Looking Back at the Kris Versteeg Trade”