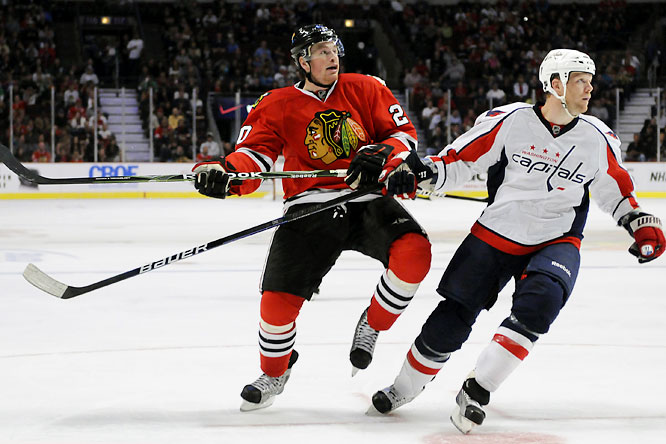 After an underwhelming performance against the Calgary Flames on Monday night, the consistent mediocrity from the Blackhawks is more than a trend. It’s a major issue.

How do you wake up a team that’s clearly talented enough to beat anyone, yet focused enough to lose to anyone at the same time?

It’s time for GM Stan Bowman to make it known in the locker room that, if a player isn’t going to be here next year, they won’t be here in March. It’s time for the housecleaning to begin.

Here is the list of free-agents-to-be on the current Blackhawks roster:

If we’re going to rank the priorities for Bowman when he addresses future contracts, the list probably reads something like this:

Yes, that’s a list of only three players, and there are 12 pending free agents on the roster. That’s the point.

It’s doubtful that a team would trade an asset for a player like Pisani or Johnson, and neither is doing much to impact the NHL roster. Pisani has been a solid special teams player, but hasn’t impacted the offense at all. Both of them could, and should, be placed on waivers. If a GM somewhere wants either of them, Bowman should let them walk.

Similarly, Bowman should be exploring any and all options to move Kopecky. His 31 points are already 10 more than his previous career high, and the list of forwards hitting the free agent market this summer is short. As teams deal with injuries and look for cost-effective scoring, Kopecky and his minimal cap number could become a decent option for cash-strapped teams trying to make a playoff push.

The problem with Kopecky is that his production will likely make him a $2M per season player in his next contract, and with the youngsters coming up in the Hawks organization that isn’t a cost they can, or should, pay to retain Marian Hossa’s wingman.

When looking at the restricted free agents, a case can be made to move or keep all of them. Seabrook will likely stay, and keeping Brouwer should be the second priority moving forward. Crawford will likely get “special” treatment after last summer’s debacle with Antti Niemi.

What will the Hawks do with their fourth line of Skille, Stalberg and Dowell?

Dowell could get a few more years in Chicago. He has been an effective fourth line center and is inexpensive. The biggest help for him is the reality that most of the centers in the organization are probably more than a year away from the NHL.

With Skille and Stalberg, though, the clock might be running already.

Stalberg figures to have more leverage than Skille, but certainly hasn’t earned it. The politics of professional sports are very real, and the fact that Skille was drafted by Dale Tallon and Stalberg was the centerpiece of a trade made by Bowman likely means the organization will keep Stalberg if the situation becomes an either/or scenario.

If Skille isn’t going to be here next year, the Hawks might as well try moving him now.

The Fourth Period reports that the Blackhawks and Thrashers are talking, and it makes sense. Brent Sopel would be an improvement over anyone skating with Nick Leddy on the Hawks third pair, and is a free agent this summer.

Whether or not the Thrashers and Hawks pull the trigger on a deal is all conjecture at this point, but the fact is that the Blackhawks have shown the fans enough that the organization should feel free to make deals whenever possible.

If the marketing braintrust of John McDonough and Jay Blunk are worried about a similarly negative reaction from the fans as they received when popular players like Dustin Byfuglien, Andrew Ladd, Kris Versteeg and Brent Sopel were dealt, they shouldn’t.

The fans want wins. While the departures were expected and justified, losing players off the Stanley Cup roster hurt because those players won. The players that replaced them, and the veterans that returned from that team, have disappointed this season. It’s time to make moves that wake up the current team and improve the future of the Blackhawks now.