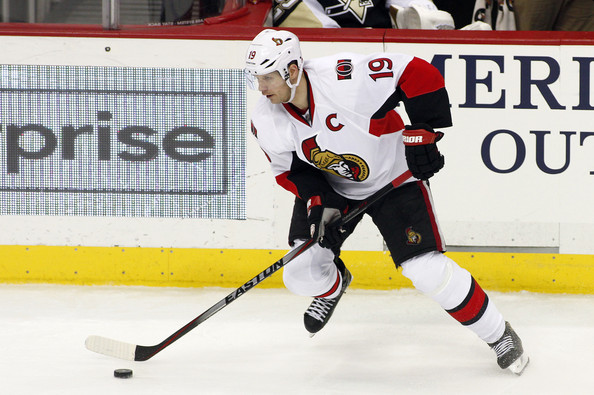 The Ottawa Senators are in the process of finalizing a divorce with one of the central figures in their franchise over the last decade. Spezza has given Ottawa a list of teams he won’t accept a trade to, which leaves the rest of the NHL to decide how his $7M cap hit fits into their situation.

That’s a big number, but Spezza could be the right guy to hold the center spot on Chicago’s second line down until Teuvo Teravainen is ready.

But how would the Hawks fit Spezza into their roster – and under the cap?

Spezza turns 31 today – June 13 – and has one year remaining on a deal with a $7M cap hit. He posted 23 goals and added 43 assists in 75 games last year, but had a career-worst minus-26 rating. Spezza won 56 percent of his faceoffs and finished fourth on the Sens with 47 takeaways; that total would have ranked fifth on the Blackhawks behind Marian Hossa, Jonathan Toews, Brandon Saad and Duncan Keith.

What would the Hawks have to do to make Spezza-to-Chicago a reality?

There are a few layers to any answer to that question, some of which also end with a question mark.

These are three significant issues that only the Ottawa front office can answer, but if we turn the calendar back 12 months we can see one significant trade they have made recently.

On July 5th last year, the Sens acquired Bobby Ryan in a blockbuster trade that sent three pieces back to the Anaheim Ducks. The Sens parted ways with Jakob Silfverberg, Stefan Noesen and their first round pick in the upcoming 2014 Draft to bring on Ryan.

When the Ryan trade went down, Silfverberg was a 22-year-old with 48 NHL games on his resume. In his rookie campaign, Silfverberg had 19 points in just over 16 minutes of total ice time per night, of which he averaged 67 seconds of short-handed ice time per game.

Silfverberg was a second round pick in 2009. Noesen was the Sens’ first round pick in 2011. Noesen missed most of the 2013-14 regular season because of injury after scoring 25 goals with 28 assists in 51 games with the Plymouth Whalers during his final OHL season. In four playoff games with Anaheim’s AHL affiliate, Noesen had four assists this spring.

The package Ottawa gave up to acquire Ryan was significant.

What would the Hawks have to give up to (likely) rent Spezza for 12 months?

Yesterday, we presented the case for the Hawks taking a long look at the Rangers’ Brian Boyle in free agency this summer. He would add size to the Hawks’ bottom six and could come at a cheaper price than Marcus Kruger will command next summer, even as a restricted free agent.

If the Hawks were able to land a solid defensive center like Boyle in free agency, would that open their minds to potentially including Kruger in a trade for a player like Spezza?

Ottawa ranked 22nd on penalty kill last season. Kyle Turris did a nice job at the dot while short-handed, as did Zack Smith. But they were on the ice for 17 and 12 power play goals against, respectively, on a team that was short-handed more times (320) than any other team in the NHL.

If the Hawks included Kruger, the rights to a Ben Smith, Jeremy Morin or Kevin Hayes (assuming they would sign) and either another prospect or a pick, would the Sens pull the trigger? Could a player like Dennis Rasmussen come into the picture?

And, if the Sens were willing to eat some of Spezza’s cap hit, how much sweeter would the package become?

There’s another question Ottawa can’t answer: Do the Blackhawks even want Spezza?

Given the future contractual obligations that both Ryan Kesler and Joe Thornton carry, it’s hard to see the Hawks making a significant play for either given the new deals for Toews and Kane will kick in during the 2015-16 season. The fact that Spezza has only one year remaining on his contract is what makes him the most intriguing fit for the Hawks this summer.

However, TSN’s Darren Dreger had a few interesting comments about Spezza earlier this week on TSN 1200.

“In Jason Spezza, general managers look at how he plays,” he said. “Some of them are okay with it because he generates the offence that he does and we’ve seen that kind of high-end ability, but there are others, who are more defensive minded, who can’t stand the tricks and some of the maneuvering and whatnot particularly in the neutral zone and how defensively porous he can be at times… so I think you’ve got a mixed bag here.”

Organizations that aren’t big fans of players who are “defensively porous” and who “can’t stand the tricks and some of the maneuvering” certainly sounds like it would exclude the Hawks from the running for the veteran center… but Stan Bowman traded for Kris Versteeg last year.

The next couple weeks will certainly be interesting to watch.