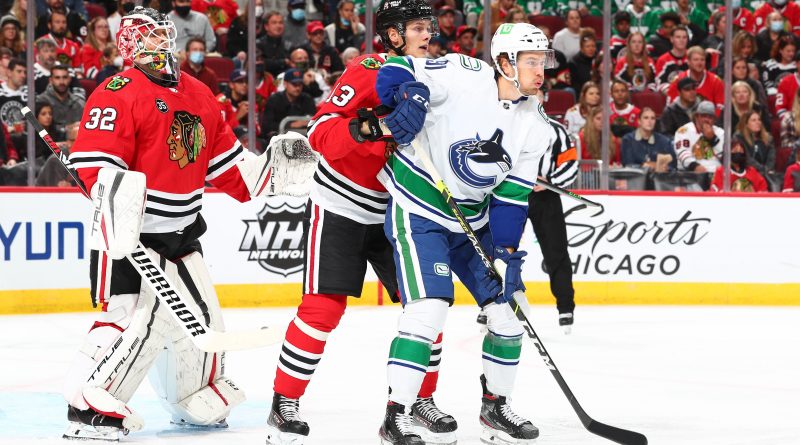 The Blackhawks came into Thursday night’s game against the Canucks without a win of any sort through four games to start the regular season. The Blackhawks have yet to lead this season. And they have yet to begin a third period with the score even tied.

Here are the scores of the first four games entering the third period:

Noticing a trend? Heaven forbid the Blackhawks score a second goal in the first 40 minutes of a game.

At least the Blackhawks ended the first period with the score tied on Thursday. After Jason Dickinson scored the first goal of the night for Vancouver (off a pretty pass from our old friend Matthew Highmore), the Blackhawks took advantage of the Canucks’ awful penalty kill to get back to even. Alex DeBrincat handled the business end of the scoring.

The Hawks out-shot the Canucks 12-9 in the first period and Lankinen looked solid.

Tanner Pearson gave Vancouver a 2-1 lead at 9:55 into the second, but the Hawks kept hanging around. That is, until Dylan Strome went to the box and was quickly joined by Connor Murphy, giving the Canucks a two-mad advantage for almost a full two minutes. Vancouver took advantage; Brock Boeser scored to extend the lead to 3-1.

The Blackhawks out-shot the Canucks again in the second period (9-8) but Vancouver scored twice to nothing for Chicago.

The two sides skated back and forth with very little action for almost 17 minutes in the third period. But Vancouver took a penalty just as Kevin Lankinen was heading to the bench for an extra attacker with 3:10 showing on the clock and the Hawks still down two.

When Lankinen went to the bench, the six skaters the Hawks had on the ice included Tyler Johnson… as the net front player. So a 5-8 forward was “screening” a 6-4 goaltender while Kirby Dach sat on the bench. Add that to the list of marvelous strategic innovations.

The Blackhawks power play did nothing, Connor Garland left the penalty box and received the puck for an easy tap into the empty net for another Vancouver goal.

The final score: 4-1 Canucks. And the Blackhawks now have one point through five games (0-4-1) to start the regular season.

Before the game, the Blackhawks celebrated Patrick Kane reaching 1,000 points in his Hall of Fame career. Jonathan Toews appropriately awarded Kane with the stick and got the photo taken before the game on the red carpet.