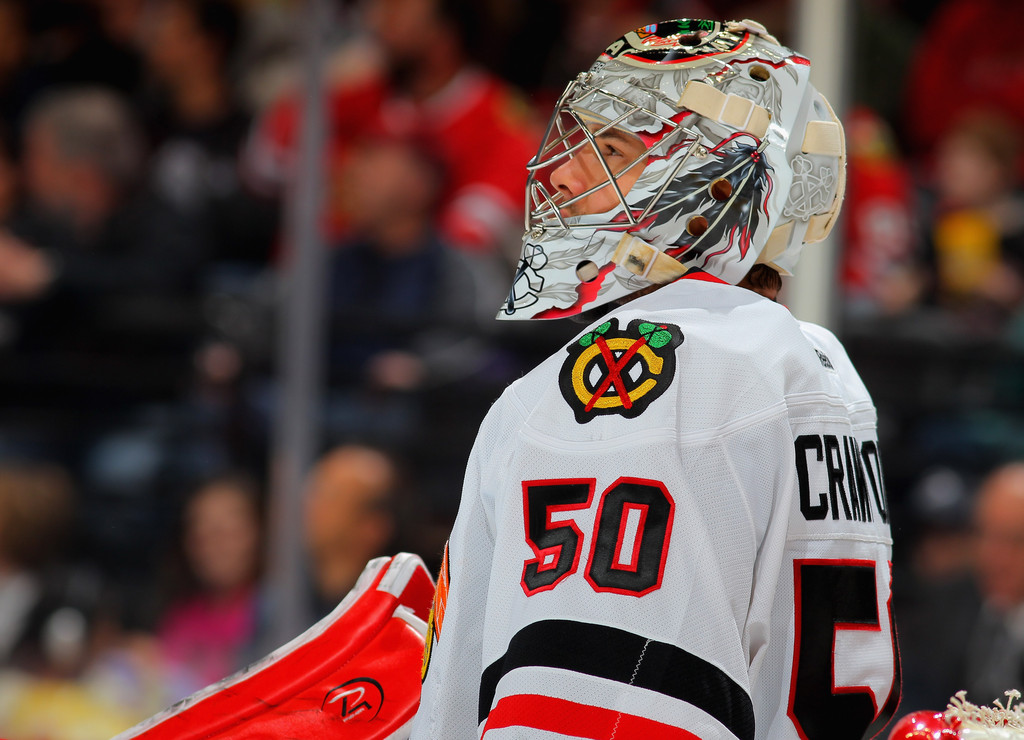 On Sunday, we took a look ahead to the upcoming first round series between the Blackhawks and Wild by focusing on two of the outstanding rookies in the NHL this year, Jonas Brodin and Brandon Saad.

Certainly those two will have an impact, but the focus of eyes all over the continent will be on the play between the pipes in this series. How will Niklas Backstrom and, more specifically, Corey Crawford handle their business between the pipes? Let’s take a look at the matchup between the two goalies. For Chicago, Crawford was the heart of every discussion about this season’s potential for the Blackhawks… and he finds himself there once again. In spite of a strong statistical season, there are still doubters that are sure he’ll be the downfall of another postseason for the Hawks.

However, Crawford has been consistent for most of the season, and has done a good job of bouncing back from bad performances this year. In three of the four months of the 2013 regular season, Crawford posted a save percentage of at least .929 with only March (.909) coming in lower.

Against Minnesota this year, Crawford was 1-0-1 with five goals allowed against 48 shots (.896 save percentage). He last started against Minnesota on March 5 at the United Center, a 5-3 victory for the Blackhawks.

While the attention will certainly be on Crawford as the starter for Chicago, we cannot ignore the performance of Ray Emery this season. He was Crawford’s equal in almost every statistical category, including goals against (in which the pair tied for second in the NHL with a 1.94 average), shutouts (each had three) and save percentage (they were separated by .004). With Emery questionable for the start of the playoffs, there will more pressure on Crawford to perform.

Together, Crawford and Emery won the Jennings Trophy for the 2013 regular season. For Minnesota’s Backstrom, the total season numbers and trends inside those totals aren’t nearly as pretty as is the case with Crawford.

Backstrom was 5-8-1 in April. He allowed at least three goals in five of his last seven starts, and had only a .901 save percentage over his last four contests.

However, some of Backstrom’s best work this season came against the Blackhawks. He appeared in three games (starting twice) and had a .934 save percentage, allowing only five goals against 76 shots. Indeed, he played better than his 1-2-0 record would indicate. In his last start against the Blackhawks on April 9, Backstrom took a 1-0 loss in spite of stopping 30 of 31 Chicago shots at the Xcel Energy Center.

While Chicago has been able to rely on two goaltenders all season, the same hasn’t been true in Minnesota. Darcy Kuemper, Josh Harding and Matt Hackett combined to start only seven games for the Wild this year, and were responsible for a 2-4-0 combined record.

8 thoughts on “Blackhawks vs Wild Playoff Preview: The Goaltenders”