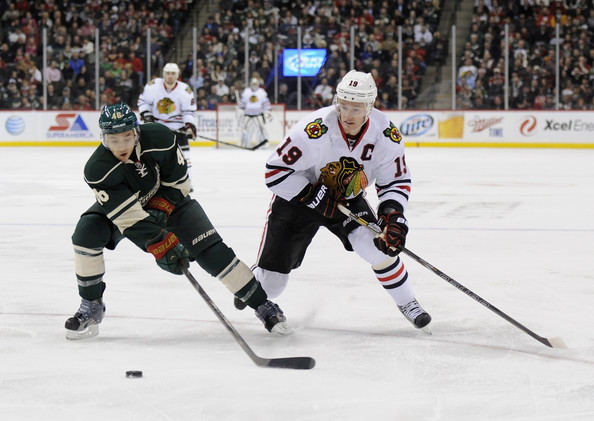 The 2013 Stanley Cup playoffs begin tonight at the United Center.

In our look ahead at the Blackhawks’ first round series against the Minnesota Wild, we’ve already examined the goaltenders and discussed the impact of two of the league’s top rookies. Now, let’s look at the rest of the rosters.

Chicago has a clear edge in offensive firepower in this series. The Blackhawks averaged a Western Conference-leading 3.10 goals per game this season, while the Wild averaged 2.46 and finished tied with Buffalo for 22nd in the league.

Zach Parise, one of the two superstar additions made in free agency by the Wild last summer, led Minnesota with 38 points (18 goals, 20 assists). Seven of Parise’s 18 goals came on the powerplay, however; as a team, Minnesota scored only 82 even strength goals during the regular season (1.71 per game).

Mikko Koivu (37 points) and Devin Setoguchi (27 points) had good seasons for Minnesota, and Jason Pominville has been very effective since being acquired at the trade deadline (nine goals in 10 games since the trade). However, Minnesota will be without Dany Heatley for the remainder of the season; in 12 games since Heatley left the lineup, the Wild are averaging only 1.8 goals per game.

Led by Koivu, Matt Cullen and Zenon Konopka, the Wild finished the regular season the third-best faceoff team in the NHL (52.4 percent). In three games against the Blackhawks this season, the Wild only managed to score five goals. Parise was held without a point and was minus-three against Chicago, while only Cullen and Setoguchi were able to have more than one point against the Hawks (two each).

Patrick Kane led the Blackhawks this year with 55 points, and finished tied with Jonathan Toews for the team lead with 23 goals. Seven different Blackhawks posted at least 20 points during the regular season; six Wild reached that benchmark (including Heatley).

For the Hawks, secondary scoring has been a key all year. The third line of Bryan Bickell and Viktor Stalberg (23 points each) with Andrew Shaw (15 points) has been strong for most of the season, and they have scored five game-winning goals between them.

Against the Wild this season, Bickell played some of his best hockey. He tied Marian Hossa for the team lead with two goals, and posted three points against Minnesota in three games. The Hawks’ top line of Hossa, Toews and Brandon Saad each individually registered three points and a plus-four rating against the Wild.

The other half of Minnesota’s spending bonanza this summer was defenseman Ryan Suter, who has been as good as advertised. He’s considered to be one of the front-runners for the Norris Trophy this year, and has emerged from the shadow of Shea Weber in Nashville as a complete defenseman. Paired with rookie Jonas Brodin for much of the season, Minnesota’s top pair has been solid.

As a team, Minnesota blocked only 614 shots this year, which ranked 25th in the NHL. However, they allowed only 27.1 shots on net per game, which was the sixth-best average in the NHL.

Against the Blackhawks, Suter averaged over 30 minutes per game, while Brodin (23:18), Tom Gilbert (22:35) and Jared Spurgeon (21:27) were the ice time leaders among Wild defensemen. Suter and Brodin combined for only one point – a Suter goal – in three games against the Hawks while Gilbert and Spurgeon only played in two games against Chicago and combined to register only one point.

For Chicago, coach Joel Quenneville spread out the ice time on the blue line effectively all season and received solid play from all seven of his defensemen. The top pair in Chicago for much of the last decade had been Duncan Keith and Brent Seabrook, but they were separated mid-season and the team didn’t miss a beat.

The Blackhawks blocked only 652 shots as a team this year, which ranked 21st in the NHL. Like Minnesota, they were among the best in the league in shots allowed on net, however; Chicago ranked fourth in the NHL, allowing only 26.2 shots on net per game.

Oddly enough, the Hawks had only one point from their defensemen in three games against the Wild during the regular season, and it was an assist from Niklas Hjalmarsson. Keith (25:27), Seabrook (23:06) and Hjalmarsson (20:37) were the only three Blackhawks defensemen to average over 20 minutes per game against Minnesota.

Have I mentioned Nick Leddy yet? So how do these teams match-up?

On paper, the Blackhawks are (obviously) the better team. As the top seed in the NHL, they have more offense coming from more places on their roster and have better depth on their blue line than the Wild. Minnesota sets up as a very favorable opponent for the Hawks. Consider that only six teams in the NHL had fewer than 1,000 hits as a team this year; two of those six were the Blackhawks and Wild.

Chicago has not only outscored opponents all season, but they’ve also played a great shut-down team defense in front of Jennings Trophy-winning Corey Crawford and Ray Emery between the pipes.

Niklas Backstrom can certainly steal a game, and there are some good playmakers on the Wild roster that cannot be taken for granted. But Chicago’s depth and skill should propel them into the second round.

Click here for the my complete first round predictions, as well as the rest of the folks from The Fourth Period.

6 thoughts on “Blackhawks vs Wild Playoff Preview: The Skaters”