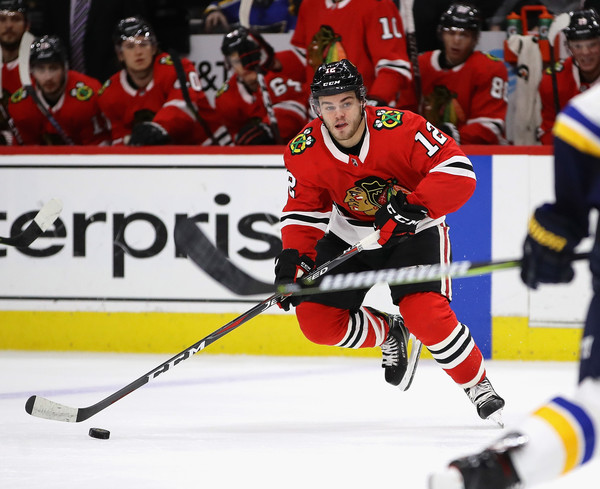 How many rookies in the long, storied history of the Chicago Blackhawks have had three hat tricks in a season?

Alex DeBrincat got it going early against the Vladimir Tarasenko-less Blues, sniping home his 23rd of the season on a power play 13 minutes into game.

Duncan Keith and Nick Schmaltz picked up the assists.

DeBrincat wasn’t done in the first, though. He was right back at it inside the final minute of the first, this time tapping it home.

Tomas Jurco and Jordan Oesterle were credited with helpers on the Hawks’ second goal of the night.

Chicago finished the first period with a two-goal lead.

Usually, the Hawks struggle to hang onto a one-goal lead.

Don’t worry. They blew the lead in the second.

But this is St. Patrick’s Day weekend and the Blackhawks were playing the Blues, so why not make it exciting? David Kampf tucked home his fourth of the season with two seconds left in the second to recover a lead for the Hawks.

After 40 minutes, the Blackhawks held a 23-22 shot advantage and a one-goal lead on the scoreboard.

Chicago hadn’t allowed an even strength goal yet, so Vladimir Sobotka tied the game at 15:24 into the third. But DeBrincat wasn’t finished.

His hat trick gave the Blackhawks a 4-3 lead with 3:13 left in regulation. And added DeBrincat to an incredible list.

Alex DeBrincat has two goals, one away from his third hat trick.

But why would the Hawks make history in a victory? Jonathan Toews made history (with Patrick Kane) in Buffalo on Saturday in a loss, so why should DeBrincat get to enjoy his record in a victory?

Alex Pietrangelo tied the game at four less than two minutes after DeBrincat’s third goal of the night and Patrik Breglund eventually won the game in overtime.

Toews won 18 of 28 at the dot but only put one shot on net in more than 20 minutes of ice time. Kane led Chicago with six shots on net but didn’t pick up a point. And rookie Matthew Highmore got hurt, limiting his night to nine shifts and five minutes of ice time.

JF Berbue faced 41 shots and allowed all five goals in the loss.