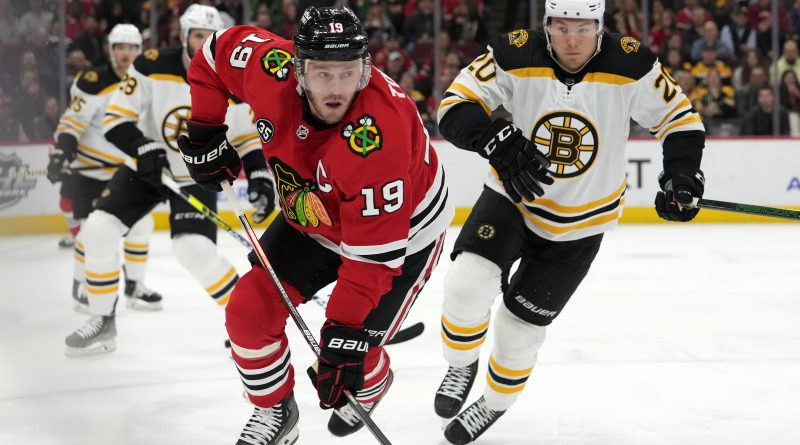 Some nights you sit back and watch Marc-André Fleury do his job and forget how terrible this Blackhawks team has been around him.

Tuesday was one of those nights.

In the first period, the Bruins out-shot the Hawks 14-4. Chicago had eight shot attempts. And the Hawks were credited with one blocked shot in the opening 20 minutes — by Patrick Kane (of course).

Both teams had a power play in the first; neither scored. Thanks to Fleury, the game was tied at zero heading to the second.

The second period saw the Bruins out-shoot the Blackhawks 20-7. Chicago was credited with 11 shots on net in 40 minutes, a total that didn’t match either period for Boston. The Hawks blocked six shots in the second — two each from Calvin de Haan and Jake McCabe and one each from Kane and Philipp Kurashev.

But, through two periods, Fleury had stopped all 34 shots he faced. He earned every bit of multiple standing ovations. And while the offense was nowhere to be found in front of him, he continued to give his team — the Blackhawks — a chance to win the game.

It took 40 shots and 44 minutes, 43 seconds for the Bruins to finally get on the board. Patrice Bergeron showed off the hands that will make him a Hall of Famer sometime in the future with a tricky tip-in goal in traffic to end Fleury’s ridiculous shutout bid.

Meanwhile, the Hawks continued to be frustrating offensively. It appeared Alex DeBrincat had a great look while the game was still tied at zero but tried to pass the puck instead of putting it on net; the team’s leading scorer has to shoot there, but he didn’t.

With 10:24 left in regulation, Caleb Jones unloaded a shot from the point and Brandon Hagel, who was in the right spot — in front of the net — got a piece of it. And the game was tied.

With 4:45 left in regulation it appeared the Bruins scored through more traffic in front of Fleury but the officials immediately wiped the goal off the board. It appeared the official saw goaltender interference on the play… but replay showed it might have been Riley Stillman who made contact with Fleury. Boston challenged the ruling on the ice, a risky move if they were wrong because it would give the Hawks a power play in a tie game with less than five minutes left.

While it appeared the contact didn’t come from a Boston skater… the review upheld the call on the ice. And Chicago got an advantage, their third of the night; the Blackhawks had only one shot on their two previous power plays, however.

The Hawks flipped Kane and DeBrincat to opposite sides of the ice for the start of the advantage and got some good puck movement but no scores before making a change after about 75 seconds of the power play. The second unit failed to get anything going and the power play expired with the score still tied at one.

At the end of regulation, Fleury had faced 46 shots and allowed just one goal. He was brilliant. The offense was not; Chicago was credited with nine in the third for a 60-minute total of 20 shots on net. But with the one goal from Hagel, the Hawks picked up at least one point in the standings and we headed to overtime.

Sadly, the turnovers that plagued the offense all night cost the Hawks in overtime. Matt Grzelcyk received a pretty pass from Taylor Hall and put home the game-winner at 1:40 into OT.

If you didn’t notice Dominik Kubalik much, it’s because he rarely skated. He was on the ice for 11 shifts and 8:46 in regulation and was credited with one shot on net and one hit. Sources have told me that Kubalik may have played his final game for the Blackhawks on Tuesday night… a deal may be coming soon.