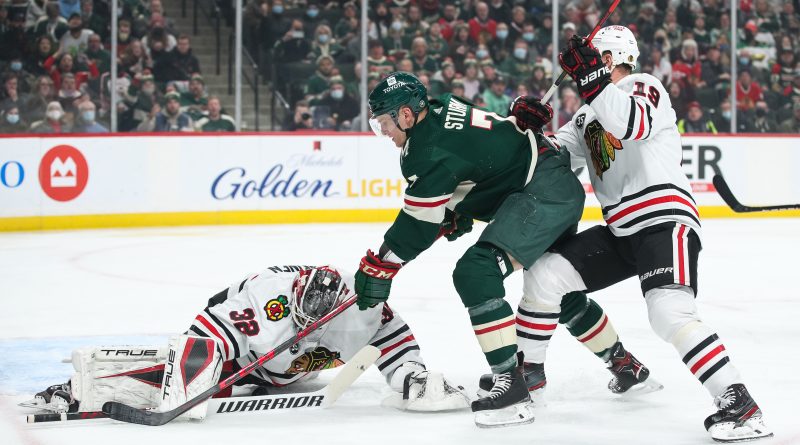 If you can figure out these Blackhawks, please let us know.

After getting their tails thoroughly whipped all over their home ice by the Wild on Friday night, the Hawks went into Minnesota one night later and looked like a completely different team.

No, it wasn’t Henrik Borgstrom returning to the lineup — not totally. Or Caleb Jones taking the place of Riley Stillman on the blue line.

Kevin Lankinen had one helluva night between the pipes after coming in on a relief assignment Friday. He certainly took a few goals away from the Wild, but his counterpart — Kaapo Kahkonen — was stellar for Minnesota.

The Blackhawks just decided to show up tonight, apparently.

Borgstrom did start the scoring, redirecting an Erik Gustafsson shot into the net almost ten minutes into the first period.

The Blackhawks were dominating the first period. They were out-shooting the Wild, Lankinen was playing well and everything appeared to be clicking.

But we aren’t allowed to have nice things — or comfortable periods — this year. So the Wild cut the lead in half on a Joel Eriksson Ek goal with 30 seconds left in the first.

Chicago out-shot Minnesota 17-8 in the first period and looked, again, like a completely different team than the one that failed to show up on Friday night.

Minnesota pushed back big time in the second period. And Lankinen was marvelous. Neither team scored in the second, but Lankinen was under fire the entire period. The Wild finished the middle stanza with a 20-9 shot advantage in the frame.

Early in the third, it appeared Alex DeBrincat took a high hit and was sent flying to the ice. Jonathan Toews responded by hooking Kirill Kaprizov; Chicago’s entire bench was barking at the officials over the lack of a whistle on the play with DeBrincat. Toews was so pissed he slammed the door to the penalty box and picked up a second minor for unsportsmanlike conduct.

Less than 80 seconds later, the Blackhawks were able to take the lead back. Borgstrom was on the doorstep and slammed home a loose puck to give Chicago a 3-2 lead.

The Blackhawks were able to hang onto the lead until Minnesota emptied their net for an extra attacked with a little more than three minutes left in regulation. Kevin Fiala scored the tying goal with 2:04 remaining in regulation.

Neither side would score in those final two minutes and we headed to overtime.

Lankinen stopped 39 of 42 in 60 minutes of hockey and was absolutely awesome. Kahkonen stopped 31 of 34 for Minnesota. Both netminders were really good all night.

Dylan Strome’s hot streak at the dot continued! He won 14 of 20 faceoffs in regulation with one assist in 16:51 before overtime.

Borgstrom had the hot hand but only skated 8:06 in regulation. He scored twice and was credited with three shots on net while winning three of five faceoffs.

As Minnesota skated up the ice with the puck early in overtime, Kane took a stick to the face from Kaprisov. Four of the six skaters on the ice went after each other when the play was stopped for a penalty that appeared to be coming on Kaprisov — which did happen. But the refs also got Kane for a hook on the play, so both went off for two minutes.

From there the skating was furious back and forth on the ice. Teams were trading great chances and neither goaltender was letting anything go. Marcus Foligno got between Dominik Kubalik and Seth Jones and beat Lankinen to get Minnesota the second point and the victory.

For as much as this was a huge improvement over Friday night’s effort, the reality once again is the Blackhawks could not close the deal against a team they’re theoretically chasing for a playoff spot. Instead, the Hawks wasted an exceptional effort from Lankinen and got closer to the Columbus Blue Jackets having a top-ten pick in the 2022 NHL Draft.

At least the Packers lost?