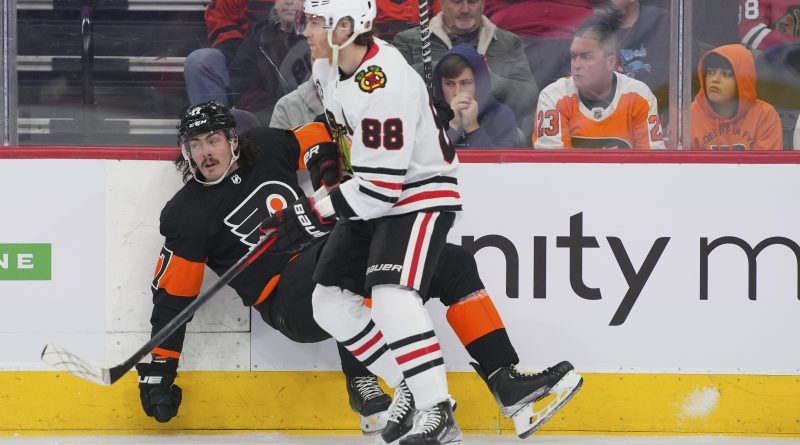 The excitement for a Saturday mid-afternoon game between the Flyers and Blackhawks was… something. Neither team is in the playoff picture, both teams have core veterans potentially on the move before the deadline, and we had the added bonus of an ABC television crew butchering basic facts (like Patrick Kane being the No. 1 overall pick and Dylan — not Ryan — Strome being on the Blackhawks).

Oh, and the last time the Blackhawks won a regular season game in Philly was 1996 (they mentioned it about a dozen times during the broadcast).

The opening 20 minutes gave us one goal, off the stick of Oskar Lindblom. Kevin Lankinen was trying to see around multiple levels of screens; Riley Stillman didn’t help him much and the puck was redirected about 10 feet in front of the net.

Stillman almost made up for the screen on Lankinen inside the final six seconds of the first period. Jonathan Toews won an offensive zone faceoff and Stillman ripped a shot that got the post but didn’t go in.

After one period, the Hawks were down one goal. Philadelphia out-shot the Hawks 12-10 in the first.

The second period was a completely different game than we saw in the first.

Toews won a faceoff and Alex DeBrincat sniped home his 150th career regular-season goal to tie the game at one only 24 seconds into the second period.

It was almost the same play the Hawks attempted with Stillman at the end of the first period but DeBrincat was able to find the back of the net.

A little more than 12 minutes later, Patrick Kane and Dominik Kubalik executed a nice give-and-go that ended with Kane finding Strome across the offensive zone for an easy rip into the net. Chicago now had a 2-1 lead.

The Blackhawks held the lead for less than three minutes. Cam Atkinson’s 19th of the season tied the game at two at 15:28 into the second.

After the goal, Derick Brassard and Calvin de Haan got into it in front of the net. DeBrincat jumped in to help de Haan and was he was dragged out of the pile by Rasmus Ristolainen (who looks to be a foot taller than DeBrincat). So who skates in and jumps on Ristolainen? Toews.

The result of the scrum was Toews, de Haan and Brassard going to their respective penalty boxes. Chicago killed the penalty and quickly took the lead back when the two sides returned to even strength. Strome scored his second of the day to give the Blackhawks a 3-2 lead late in the second.

The game was getting increasingly chippy from the middle of the second period on, and it started to boil in the middle of the third period. With nine minutes left in regulation, after they got mixed up earlier in the shift, Kirby Dach hammered Kevin Connauton into the boards. The hit looked to be clean, but it was high. Unfortunately, Connauton’s leg got messed up under the hit and his head made hard contact with the boards.

A minute later, after the benches chirped at each other for a while and after a save by Martin Jones, everybody was throwing hands once again.

The result of the fighting was Travis Konecny, Ristolainen, Caleb Jones and Connor Murphy all went off for two minutes.

Caleb was joined by brother Seth in the box 53 seconds later when he got mixed up with Lindblom, who got four minutes for high sticking at the same time. So there were three bodies in the Blackhawks’ penalty box and four in the Flyers’ with the Hawks on the power play for the first time in the game.

Chicago didn’t get anything done while they had the advantage, unfortunately.

The Hawks were struggling to get the puck into the offensive zone and keep it there for long in the final three minutes. They finally signaled for Lankinen to get off and immediately iced the puck. So Lankinen didn’t get to the bench until 1:50 was left in regulation.

Appropriately, the Hawks passed the puck around the offensive zone for the final ten seconds of regulation and didn’t even get a final shot on net. Another loss in Philadelphia in the books.