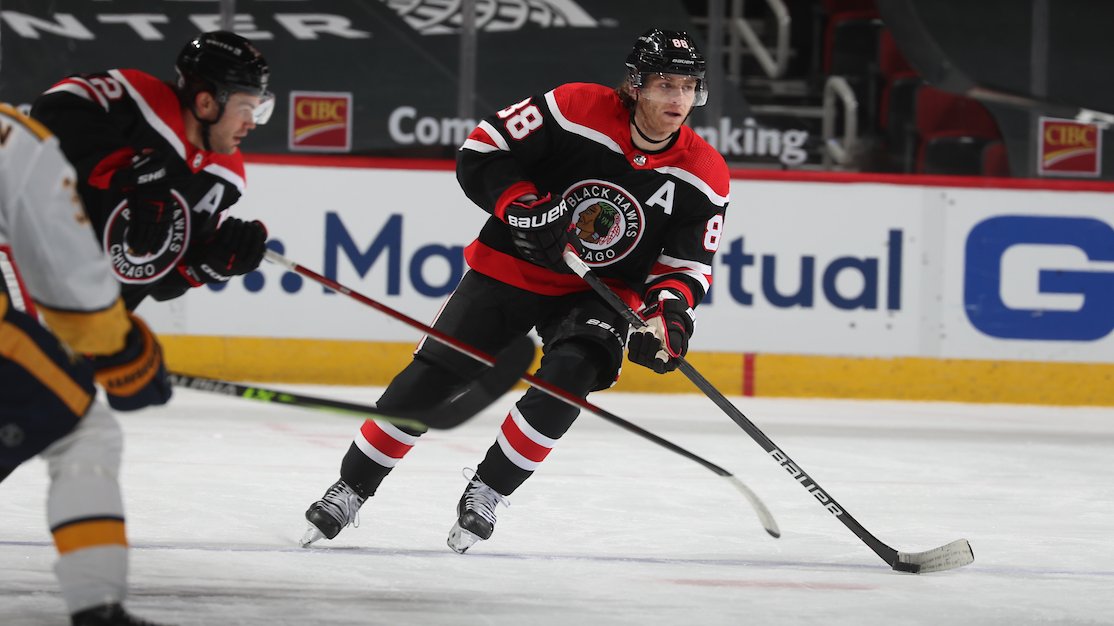 When the Blackhawks took the ice to start their Sunday evening game against the Nashville Predators, they already knew the Columbus Blue Jackets had suffered a 4-1 loss at the hands of the Red Wings. Sadly, the Florida Panthers lost Aaron Ekblad to what appears to be a significant leg injury on Sunday afternoon as well. So there was an opportunity for the Hawks to make generate some movement and momentum in the standings.

However, the Hawks were coming off a lackluster performance against the Predators on Saturday evening. Coach Jeremy Colliton wouldn’t reveal any lineup changes until just before taking the ice but Malcolm Subban got the call in net. Dylan Strome was not with the team because he was becoming a father, but Kirby Dach would skate in his second game of the season after putting in more than 20 minutes on the ice in his 2021 debut.

Colliton was clear that he needed to see better effort from his skaters on Sunday night. How would they respond?

With two shots on goal in the opening ten minutes of the game.

Subban was okay in the first period. He allowed zero goals on shots that weren’t redirected off a teammates’ skate.

At 4:43 into the game Viktor Arvidsson banked a shot off Calvin de Haan’s skate that redirected into Subban and into the corner of the net to give Nashville a 1-0 lead.

With 90 seconds left in the period, Mattias Ekholm spun and fired a shot at the net. de Haan was tied up in front of the net with Calle Jarnkrok and the puck hit one of their skates and went into the net. The goal was reviewed and allowed to stand. A tough first period for de Haan’s feet and Subban’s save percentage.

The teams were both credited with eight shots on net in the first period. Chicago was down two, however.

Chicago had one power play in the first period that was incredibly pedestrian. Their advantage in the second period was mediocre as well. After 40 minutes of hockey, the Blackhawks still hadn’t beaten Pekka Rinne. Nashville had a 20-19 shot advantage but many of the Blackhawks’ chances were one-and-done. The passing over the first two periods left a lot to be desired again as well.

Colliton was riding Dach hard again as well. He was at almost 15 minutes of ice time through two periods after a heavy workload on Saturday.

The third period started as softly as the first two played out. Chicago got a third powerplay four minutes into the period, however. That alleged advantage went as well as the first two and they skated on chasing two.

Alex DeBrincat finally got the Hawks on the board at 7:35 with a snipe from the short side. After a couple nice saves from Subban, the Hawks went the other way. A bouncing puck found DeBrincat and he ripped the shot home to cut the lead in half.

Patrick Kane and Pius Suter were credited with the assists on DeBrincat’s 17th of the year.

On his next shift – less than two minutes later – DeBrincat made a strong power move to the front of the net and tied the game.

Suter was credited with his second assist of the night on DeBrincat’s 18th of the year.

Unfortunately the lead didn’t last very long. Dach tried to get the puck out of the zone passing toward the middle of the ice (which didn’t work out well on Saturday night) and it failed (just like Saturday night). A couple passes later Roman Josi gave Nashville a 3-2 lead almost exactly four minutes after DeBrincat had tied the game.

The Blackhawks pulled Subban with one minute left in regulation but couldn’t get organized enough to get a solid attack formed. They wasted almost 30 seconds trying to get the puck into the zone before Nashville iced the puck.

Kane got a shot on net in the final second but Rinne made the stop. There would be a final faceoff with 0.7 on the clock but the Hawks didn’t have enough time to tie the game.

A solid effort from Subban was wasted.

Subban stopped 26 of 29 in the loss. After the two tough goals off skates in the first he kept his team in the game long enough to climb back to a tie score, but the Hawks turned the puck over one time too many and it cost them. Again.

Dach was second among Hawks forwards with 21:17 of ice time. He was minus-three in the game with one shot on net, two blocked shots, one hit and one takeaway. Dach won seven of 16 faceoffs in the loss.

Kane skated a forward-high 24:45 and finished tied with Suter, DeBrincat and Duncan Keith with a team-leading three shots on net.

Keith led the Hawks with four blocked shots in 24:21.