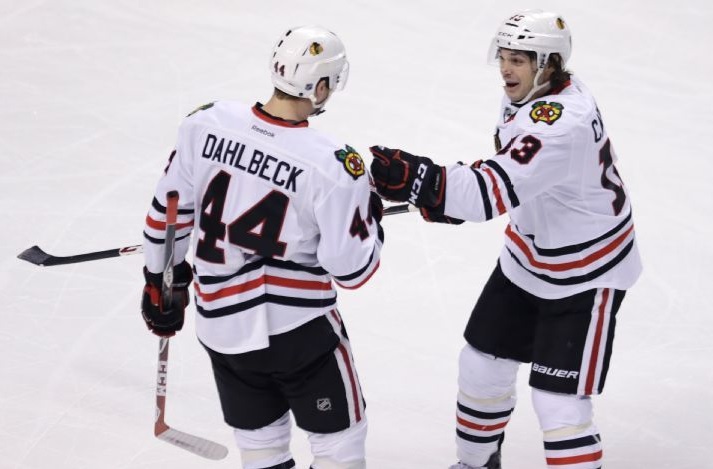 The Blackhawks went into Boston and took away two points, but the win may have been their most costly of the season. In the second period, Dennis Seidenberg sent Chicago Captain Jonathan Toews into the boards head first. Toews returned for only one shift before leaving the game for “precautionary reasons.”

The league will undoubtedly look at the hit by Seidenberg, who was called for boarding on the play. But the NHL will also undoubtedly have questions for the Blackhawks, who allowed Toews to stay on the ice for the ensuing 5-on-3 power play until he went to the box himself less than a minute later. When Toews’ penalty ended, he immediately went to the room and did not return.

Chicago got on the board first when Klas Dahlbeck scored his first NHL goal. He was set up by a great play by Ben Smith, who would score the Hawks’ second goal later in the opening frame. Kruger had an assist on both goals.

The teams exchanged goals in the second, as Patrick Kane extended the Chicago lead to 3-0 at 13:19 but Reilly Smith would score at 18:37 to bring the lead back to only two.

In the game’s first 40 minutes, Boston center Patrice Bergeron had won more faceoffs (18 of 22) than the entire Blackhawks team (17). Bergeron finished the night winning 22 of 30 faceoffs; Chicago won 27 as a team in the game.

Torey Krug cut the lead to 3-2 in the middle stages of the third period after Milan Lucic drove through the Hawks defense. Andrew Shaw hit Lucic after he made the pass to Krug, and the teams got together for a few “conversations.” The aftermath saw Krug and Dahlbeck go off for minor penalties, while Shaw and Chris Kelly dropped the gloves and received five for fighting.

Shaw has to be smarter than that and understand the situation the Hawks were in with Toews already done for the night. He went to the box for five of the game’s final eight minutes, leaving the team with Smith, Kruger and Brad Richards at center against a Boston team that was already dominating at the dot.

For his part, Scott Darling help up under significant pressure in the second and third periods without Toews available. Darling stopped 32 of 34, and the Hawks were out-shot 20-9 in the games’ final 40 minutes but held on to earn their eighth straight victory.

The win is nice, but there is still concern for the well-being of Toews. Chicago faces Nick Leddy and the Islanders this weekend, and have eight games in the final 19 days of December.