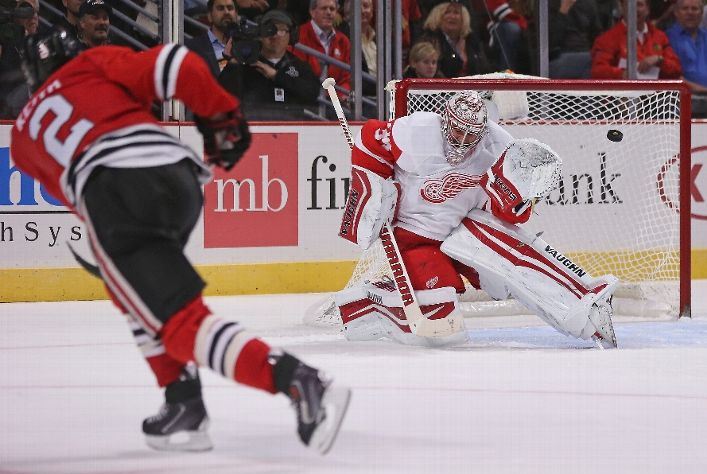 It took 3:01 into overtime for the Blackhawks to earn a victory, but the 2014-15 preseason got off to a winning start at the United Center on Tuesday night.

Jonathan Toews scored the overtime game-winner to send the fans home happy, and Patrick Kane scored a gorgeous game-tying goal on a breakaway in the second period. Duncan Keith had assists on both goals and skated 24:20 on the night.

One interesting play by coach Joel Quenneville was pairing Saad with Phillip Danault on penalty kill duty. Danault spent his even strength ice time stuck between a couple pylons (Brandon Mashinter and Cody Bass), but played very well while short-handed with Saad. In the game, Danault skated 3:50 on PK and was credited with two blocked shots and two hits in the game. He also won eight of 12 faceoffs on the night.

Bass was credited with four hits and dropped the gloves with Aaron Rome after Rome chirped Patrick Sharp late in a shift. Both Mashinter and Bass challenged Rome, but Bass was the guy who got into the worthless fight (that ended with him on his back).

On the blue line, Klas Dahlbeck was paired with Niklas Hjalmarsson and looked more comfortable as the game progressed. He finished with 19:38 on the ice, including 3:57 on penalty kill. Kyle Cumiskey skated well and blocked two shots in 18 minutes of ice time; he was paired with Michal Rozsival.

Brad Richards skated 17:28 and was credited with one assist, one hit, one takeaway and two shots on net. He won eight of 14 faceoffs.

The only Hawks center to struggle at the dot was Dennis Rasmussen, who won only three of 11. He spent the night between Jeremy Morin and Matt Carey at even strength, and was credited with three hits and one blocked shot in 13:55. At times, Rasmussen did an effective job of establishing position in front of the Detroit net.

Detroit killed four penalties easily in the game, and the Hawks killed four as well (including three in the first period). The Wings out-shot the Hawks 12-4 in the second period and 22-19 in the game. Luke Glendening scored the only goal for the visitors.

Corey Crawford started the game and allowed one goal against 14 shots in 31:47. Scott Darling earned the victory in relief, stopping all eight shots he faced in 31:14. Darling looked good in the game, making a number of tough stops through traffic.