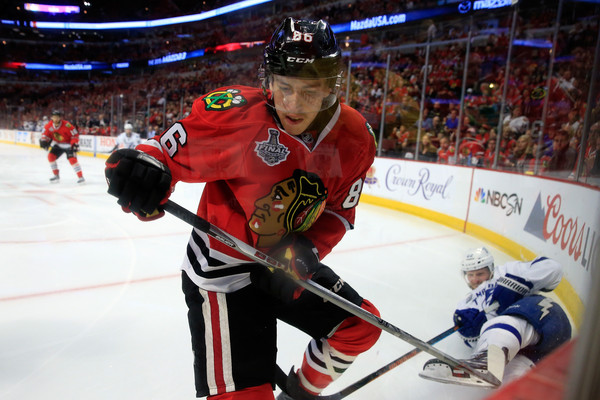 This season has not only seen a big number of career first goals, but the number of players under the age of 25 continues to play a major role in the Blackhawks success. Right now there are six players who have yet to celebrate their 25th birthday playing on a nightly basis for the Hawks, and Richard Panik will add a seventh to that list as well.

After missing on a few first round picks after selecting Patrick Kane (read: Kyle Beach, Dylan Olsen and Kevin Hayes), the Hawks have received contributions this season from players selected in the first rounds of the 2011, 2012 and 2013 Drafts.

And the organization’s first round pick in 2014, Nick Schmaltz, just finished a strong World Junior Championships and is playing well at North Dakota. He likely isn’t far away from joining the professional ranks as well.

There is also an impressive list of free agent additions on the list, headlined by Panarin from Russia and van Riemsdyk from the college ranks. Adding players outside the draft process – and without giving up assets to do so – have been a hallmark of Stan Bowman’s tenure as general manager.

Here’s a reminder of how young some current Blackhawks players (and prospects) are, and the impact some of them have already made at the NHL level.

Also making an impact this year and still in the system: