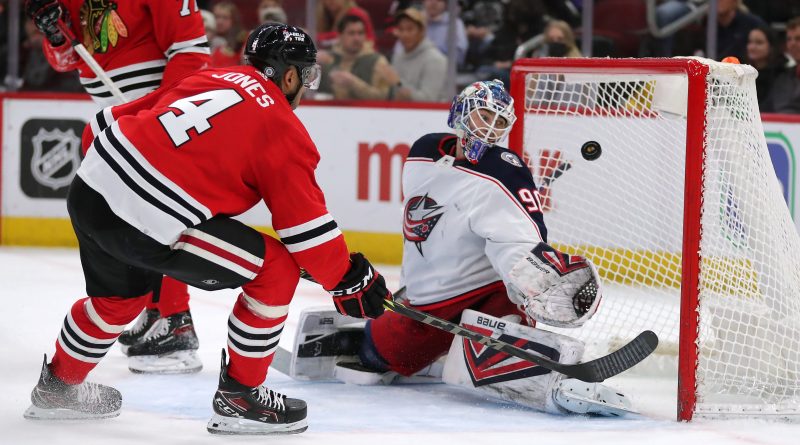 The Blackhawks welcomed the Columbus Blue Jackets to the United Center on Thursday night.

They generously welcomed the Blue Jackets to their building.

Arvid Söderblom got the start for Chicago and showed that he is clearly not ready to be an NHL netminder. But the play in front of him was garbage, especially from one of the usual suspects: Eric Gustafsson. To say defense was optional in this game is like saying leg room is optional in coach.

Boone Jenner opened the scoring for the visitors with a power play goal at 6:58 into the first. Yegor Chinakhov made it 2-0 Jackets just 13 seconds later.

It wasn’t a good start, but the Blackhawks fought back… because the Blue Jackets are a terrible hockey team, too.

Philipp Kurashev scored a power play goal at 10:24 to cut the lead in half.

But we’re not allowed to have nice things in Chicago this season. So a two-goal comeback inside the first period was rewarded with Max Domi scoring with 3:05 remaining in the period to give the Jackets a 3-2 lead, which is where the score would stand after 20 minutes. Kurashev had two points in the first period; Söderblom stopped 13 of 16.

Things had to get better in the second period, right?

Patrik Laine scored nine seconds into the middle period to push the lead back to two.

But the Hawks didn’t go away again. MacKenzie Entwistle scored inside the final two minutes of the period to cut the lead back to one.

The Blackhawks out-shot the Jackets 10-8 in the second period but trailed by one heading to the third.

The third period was more of the same. Laine scored his second of the night eight minutes into the third to push the lead back to two. But 60 seconds later, Patrick Kane found Alex DeBrincat for a goal that made a little history for 88.

But the Blackhawks suck worse than the Blue Jackets, so they allowed two more goals (one of which was into an empty net with five seconds left) to make the final score 7-4 Columbus.

Söderblom allowed six goals on 36 shots. That’s not good. He wasn’t sharp. If/When the Blackhawks trade their future Hall of Fame goaltender, things are going to get a helluva lot harder to watch this season.

Kirby Dach continued his hard work to confirm his future is as a wing. He won one of nine faceoffs in 17:25 but had a nice assist.

Ryan Carpenter had a “helping my trade value” game. He won eight of 15 faceoffs and added an assist to his first goal of the season. He was also credited with four shots on net.

Laine had a hat trick, Jenner won 15 of 25 faceoffs and had three points as well for Columbus. Seven Blue Jackets skaters had a multi-point night.

45 thoughts on “Blue Jackets Beat Blackhawks In Battle of Mediocrity”