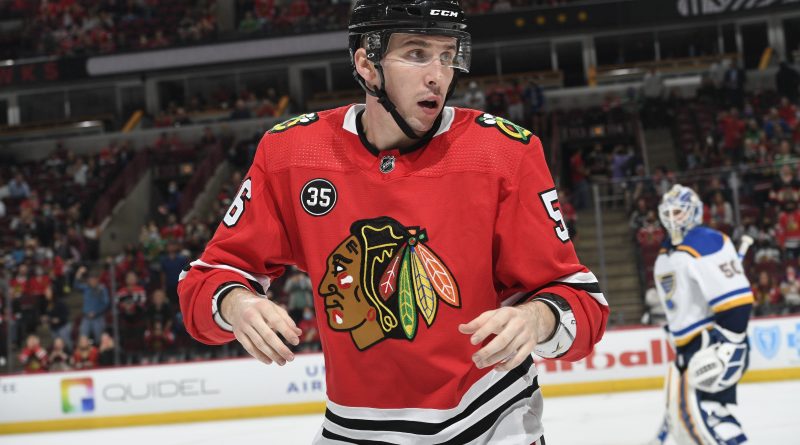 The Blackhawks hosted the St. Louis Blues on Friday night and it looked, at times, like just another Blues-Hawks game.

The difference between this game and Chicago’s first preseason game was the lineup Jeremy Colliton put on the ice. Marc-Andre Fleury made his United Center debut in the home reds. Seth Jones, Jake McCabe and Tyler Johnson made their first appearances in a game in a Hawks’ jersey as well.

And a few of the usual suspects were on the ice for the first time in this preseason. Patrick Kane and Alex DeBrincat showed off their new-look jerseys, both sporting an A on permanently on their shoulder.

Fleury played the first half of the game and was replaced by Collin Delia. For many of the new additions to the team, this was the first game action together. So, what did you think of the team’s performance?

Jonathan Toews skated again, and looked good again. Colliton didn’t run him out there every other shift like he did against Detroit on Wednesday, but the captain had another strong night as he comes back into the mix. He won 13 of 18 faceoffs and skated 17:39. If this was a test to see how he felt after playing a heavy workload on Wednesday, he certainly looked good and strong.

Fighting on Friday because it’s the Blues. We got two fights in the first period. Reese Johnson was a wrecking ball early and accepted an invitation to drop the gloves with Griffin Luce at 11:57 into the game. He did okay in the fight but it ended with him on his back. With less than 30 seconds left in the first period, Dmitry Osipov danced with Tanner Kaspick and handled his business pretty well. The game was physical and a couple young guys wanted to get some energy up for their teammates. Osipov is a big kid who threw hands pretty well.

Fleury stopped 15 of 17 in 33 minutes and looked pretty good. The defense in front of him was far from comfortable and there were a few miscues that led to odd-man rushes for the Blues.

Pavel Buchnevich is going to be a problem. The Blues stole him from the Rangers this summer. He scored the Blues’ second goal of the night and has the skillset to be a top level player in St. Louis.

Dylan Strome and Alex Nylander played. I had to double-check the box score because I barely noticed either of them during the game. To my surprise, Strome had a nice night; he won seven of nine faceoffs and led the Blackhawks with three takeaways. He was also credited with an assist. Nylander, on the other hand, had one shot on net in 14:22. He still isn’t one of the 12 best forwards in the organization and has a ways to go to prove he is.

Nolan Allan, the Hawks’ first round pick from this summer’s draft dressed. He skated on the Hawks’ third pair with Ian Mitchell. Allan signed his ELC already but clearly isn’t ready for the NHL. The good news is the Blackhawks’ current depth chart is bloated. Allan has all the time he needs to get his play ready for the league. Mitchell was limited in ice time because Colliton hates him for some reason.

Delia gave up three goals. He didn’t get a full game like Kevin Lankinen on Wednesday and was very ordinary in this one. Which, given their respective NHL ice time last year, likely favors Lankinen early in the backup competition.

Caleb Jones looked good; Seth Jones not so much. The younger Jones brother has really impressed in his first two preseason games. He scored a nice goal on Friday night and looks like he could absolutely be a viable second-pair defenseman. Seth, on the other hand, got caught out of position a few times too many. Obviously this was his first game with McCabe, so we’ll be watching to see improvement in their communication and his play.

As much as I would love to keep Tyler Johnson at the wing, he did alright as a center on Friday. Johnson won seven of nine faceoffs and was credited with four hits. However, he was minus-three in the game… as were his primary linemates, Kane and DeBrincat. I wouldn’t leave those three together in the regular season. But Colliton gonna Colliton.