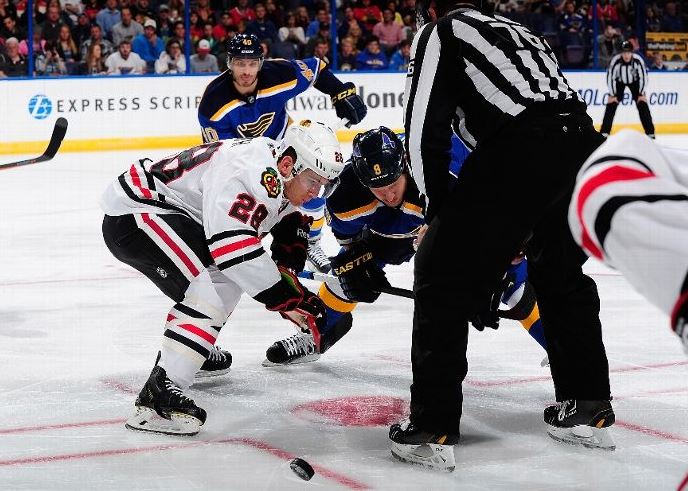 The Blackhawks struggled to find consistency and the Blues were able to hang on and beat their visiting rivals in regulation. St. Louis scored twice in the final two minutes of the second period to extend to a 3-1 lead, and that proved to be enough offense. The Hawks got a power play goal from Patrick Sharp early in the first and Kris Versteeg scored his first of the season early in the third, but they couldn’t come up with a third goal.

Coach Joel Quenneville mixed his lines up again, and continued to mess with his combinations throughout the night. The shot chart at hockeystats.ca makes clear that the Hawks were struggling to find rhythm throughout the game. There were two sections of time – one of about five minutes in the second period and another of over four minutes at the end of the second and into the third – where the Hawks were held without a shot.

The final two minutes of the second period proved to be critical, and the Blues’ second goal was controversially overturned by the league review office in Toronto. After the game, Antti Raanta told the media he felt he was interfered with as the puck barely crossed the line; the Chicago audience did not get to see the video showing the puck across the line until the beginning of the third period.

Jonathan Toews won 18 of 28 faceoffs in the game and skated 20:55, but was minus-two and finished with an even 50 percent even strength CORSI for% on the night. Toews and Duncan Keith led the Blackhawks with four shots on net each in the game, but Chicago was out-shot 31-24 in St. Louis.

In the third period, TJ Oshie hit Daniel Carcillo knee-to-knee and the Blackhawks forward immediately grabbed his right knee. He needed assistance getting to the dressing room, and has a history of knee problems.

Brad Richards was a target of physical play from the Blues the entire game (because?) but did pick up an assist on Versteeg’s goal in the third.

One positive was the Hawks’ special teams. Chicago was perfect against three St. Louis power plays, and converted one of their three advantages. The Blues came into Saturday night ranked second in the league on the power play (28.0 percent).

The Hawks return to the United Center for an early 6 pm CT start on Sunday evening. Jeremy Morin (for Carcillo) and Scott Darling may be in the lineup.