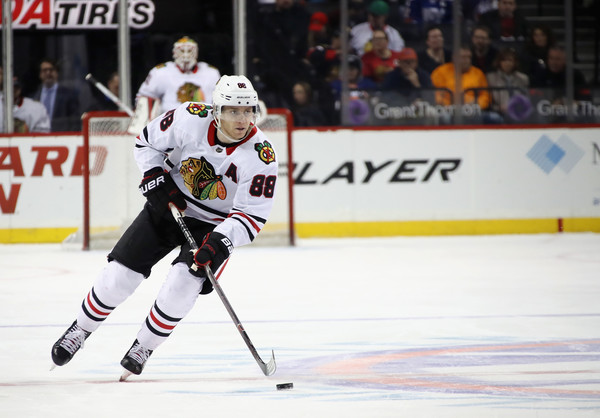 One would hope the Blackhawks were motivated heading to St. Louis for a Saturday night tilt against a hated rival.

But Ryan O’Reilly scoring 18 seconds after the puck dropped led to us thinking otherwise.

Both sides played sloppy hockey in the first period, and the score reflected it.

Patrick Kane tied the game at 3:47, firing home his tenth of the season.

Artem Anisimov picked up the primary assist on Kane’s goal, starting what would be a big night for him and that line.

The game would stay tied for less than two minutes. Zach Sanford scored his third of the season to give the Blues a 2-1 lead.

St. Louis would hold onto that lead for more than 13 minutes, but Kane and Anisimov checked back in. This time, Kane returned the favor and Anisimov put home his 150th career goal.

The Anisimov goal came with 70 seconds left in the first period, and the score would be tied at two when the horn sounded ending 20 minutes of play.

Chicago took a penalty quickly in the second period and fans around the league were shocked when Vladimir Tarasenko scored a goal against the Hawks. Corey Crawford never saw the shot. A screening Blues player parked himself in front of the net – an unpopular trend that’s developing early this season – and both Brent Seabrook and Marcus Kruger missed a block attempt on the play.

Tarasenko’s goal was his fourth of the season; three of had come against the Hawks.

But the Jake Allen wasn’t comfortable with that two-goal lead, and the Kane line wasn’t having it either.

Kane didn’t score on that play, but he did cut the lead to one a couple minutes later.

The goal is already Kane’s 11th of the year. Anisimov and Henri Jokiharju were credited with the assists, giving Kane and Anisimov three points each.

Allen wouldn’t be around to help the Hawks much longer, however.

Allen left the ice after a nasty collision with 61 seconds left in the second period. Saad drove the net and missed wide on an attempted tip of a nice pass from Anisimov. The collision with the defenseman left him face-down on the ice; he was helped off the ice and went straight to the room.

At the end of 40 minutes the Hawks were on the wrong end of a 4-3 score. After St. Louis put 17 shots on net in the first period, the two teams combined for 15 on net in the second. The Blues held a 23-19 shot advantage after two periods.

Chad Johnson, who entered the game for Allen for the final minute of the second period, remained in the game to start the third.

Johnson didn’t get tested much in the third period as the action was mostly on the other end of the rink. St. Louis added two goals, from Tarasenko and Alex Pietrangelo, to push the lead to three.

Predictably, after the Pietrangelo the Blues started to take physical liberties. A pretty good scrum happened with 98 seconds left in regulation. Marcus Kruger did some pushing and shoving and the skaters came together for a friendly conversation. No gloves were dropped and no penalties were called.

After the puck dropped Brent Seabrook slashed Ivan Barbashev, who took exception to the violence and the two did a nice little dance. Barbashev threw a couple extra punches after the official stepped between the two skaters, who got to take an early shower.

Seabrook got the extra minor lenalty for the slash, and the Hawks were short-handed for the remainder of regulation… or until Alex Steen slammed home the Blues’ seventh goal of the night.

Johnson made five saves in the third period.

Crawford was on the hook for six of the Blues’ seven goals, facing 36 shots in the game.

A sloppy game that resulted in an ugly regulation loss.

On to the next…