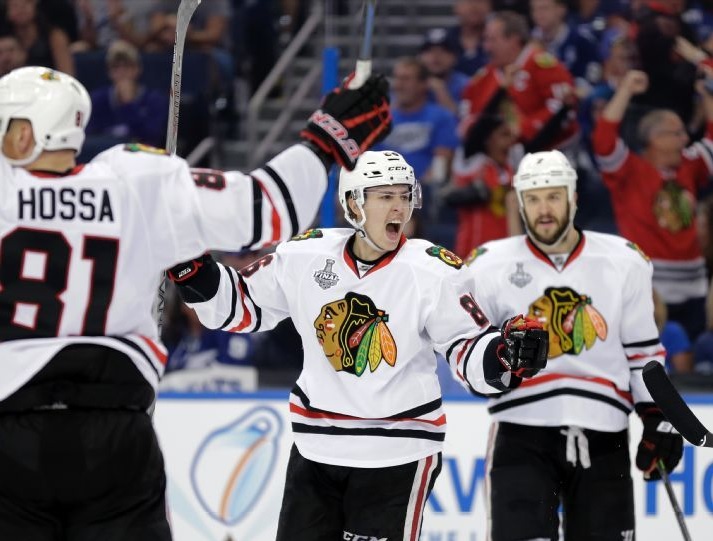 It took two goaltenders and two Patrick Sharp penalties in the third period for the Tampa Bay Lightning to outlast the Blackhawks and even the Stanley Cup Final.

Chicago had a much better start to Game Two than they did in the series opener on Wednesday, but the opening 20 minutes came to a close with the Hawks trailing by one once again. Cedric Paquette was the only Tampa player to beat Corey Crawford in the first period, scoring the first goal of the night 12:56 into the game. Crawford and Ben Bishop got plenty of work in the first, as Chicago put 11 shots on net and 12 Tampa shots found their way through.

Bishop’s best save of the period came on a great chance for Jonathan Toews with just under five minutes left in the first.

The second period became the track meet most fans expected when the series began.

Andrew Shaw tied the game 3:04 into the middle stanza, tipping a loose puck past Bishop for his fifth of the playoffs. Alex Killorn went to the box only 1:22 later, the Blackhawks took the lead on another stellar play by Teuvo Teravainen.

Set up by Marian Hossa, Teravainen once again stepped up and made a play in the biggest series of his young career.

Chicago’s lead was short-lived, though. Nikita Kucherov deflected a Jason Garrison shot past Crawford only 1:32 after the Teravainen goal. The goal was Kucherov’s tenth of the playoffs and any momentum the Hawks felt from taking the lead was nullified.

With just over six minutes remaining in an up-and-down second period, Tyler Johnson banked a shot in off Crawford from a terrible angle to give the Lighting a 3-2 lead. After the Hawks did an effective job against “The Triplets” in Game One, they made a major impact on Saturday night with two huge goals in the second period.

The third period brought plenty of drama, on and off the scoreboard.

Coach Joel Quenneville mixed up his lines in an effort to create more offense, splitting Jonathan Toews and Patrick Kane. Hossa moved up to the line with Toews and Brandon Saad, where he spent most of the regular season, and Kane moved to the second line with Brad Richards and Kris Versteeg.

Chicago opened the period with a lot of energy and Brent Seabrook tied the game with his seventh of the postseason. Tampa took issue with the goal; Hossa’s stick was tangled up with Bishop’s left skate as the puck flew past him. The goal stood, however, and the game stayed tied.

Sharp was called for a questionable slash at 4:59, but the Hawks were able to effectively kill off the minor penalty. But as Sharp came back on the ice, he immediately turned the puck over in front of the net and, only 18 seconds after coming out, he went right back in the box for high-sticking.

As the second Sharp penalty began, however, Bishop headed for the bench. Andrei Vasilevskiy came in for 1:32 of the power play, and was on the ice long enough to qualify for the win.

A Garrison blast on the following power play was tipped in front of Crawford by a friendly stick and found the back of the net for the game-winning goal.

After the goal, Bishop re-appeared from the dressing room and replaced Vasilevskiy – but only briefly. Bishop soon left for the room again, and moments later Andrej Sustr shot the puck out of play for a delay of game penalty.

Chicago wasn’t able to capitalize on the power play, and Vasilevskiy held strong in the final moments to clinch the victory.

There were aspects of the box score that were dominated by the Blackhawks, especially the faceoff circle. Chicago won 35 of 54 draws in the game, led by Toews (11 of 16), Antoine Vermette (10 of 12) and Marcus Kruger (8 of 10). Unfortunately, the final score didn’t favor the Hawks.

Keith skated 28:52 in the game and Seabrook was on the ice for 28:43 as the Hawks once again relied heavily on their top four defensemen. Kyle Cumiskey didn’t have his best night and was limited to only 5:08, an evening that may open the door for Trevor van Riemsdyk to make his Cup Final debut in Chicago.

After the game, word was that Bishop may have an issue with his left leg. That storyline will carry through to Monday when the series continues at the United Center.