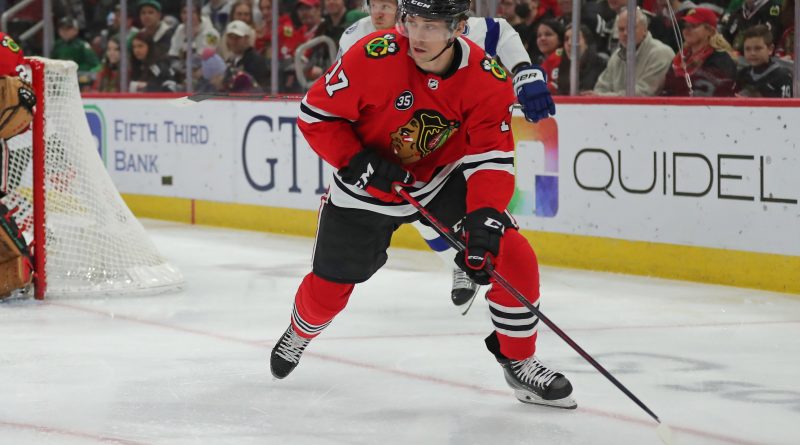 After a less than ideal loss in Philadelphia on Saturday afternoon, the Blackhawks returned to the United Center on Sunday evening for an early puck drop against the defending champs (twice) from Tampa.

Before the game, Tyler Johnson got his ring from the Bolts. Which is nice. He played well for them for years. They just didn’t have a spot for him up front any longer, so they traded their 13th forward to Chicago (sound familiar?).

We’ve seen it more times than we would like over the past few years: a really good period that doesn’t result in as many goals as it could/should have for the Blackhawks. The first period on Sunday night was a good one for Chicago. They generated good chances, kept the puck away from the net and were able to get on the board first.

Dylan Strome was on the receiving end of another pretty pass from Patrick Kane to give Chicago a one-goal lead in the first period.

Kirby Dach had two great chances in the first. One hit the shaft of Andrei Vasilevskiy’s stick, the other Dach was the victim of a nice poke check from Tampa’s netminder. Alex DeBrincat had a great look as well but couldn’t convert.

So even though the Hawks had the majority of the good chances in the period, both sides put eight shots on net and the Blackhawks took just a one-goal lead to the room after 20 minutes.

Kane had time and space and made Tampa pay six minutes into the second period, sniping home the Blackhawks’ second goal of the night.

After Kane’s goal… the two-time defending champions showed that they’re one of the best teams in the league and the Blackhawks are far from a playoff team.

Victor Hedman scored at 15:17 into the second period to tie the game at two. Cal Foote then gave Tampa the lead at 16:48 into the second — a lead they wouldn’t worry about surrendering the rest of the way.

Two goals in 91 seconds in the second period felt bad. But the Blackhawks were still within one goal heading to the third.

Any chance the Blackhawks had of coming back evaporated quickly when the Lightning ran away with the game early in the final period. Tampa scored three times in 32 seconds inside the first 2:30 of the third to blow the game wide open. Hedman scored first, followed by Corey Perry and Mikhail Sergachev. And some of the critical saves Vasilevskiy made in the first period suddenly didn’t feel like they matters quite as much as the Hawks were suddenly chasing four.

To their credit, the Blackhawks didn’t just limp out the final 17 minutes of regulation. DeBrincat cut the lead to three with 13 minutes left in regulation; Strome picked up an assist on the Cat’s 32nd of the year.

Three minutes after the DeBrincat goal, he found Kane across the crease with a wide open cage. Great pass, good shot, RIDICULOUS save by Vasilevskiy to keep the lead at three. One of the better saves you’ll see all season and Kane could do nothing but look up for a replay to see how he was robbed.

Chicago got a power play with seven minutes left in regulation but Vasilevskiy kept making big saves. Chicago failed to score on the power play due to Tampa’s goaltender reminding everyone that he’s one of the best on the planet and the clock kept ticking in the wrong direction with the Blackhawks down three.

If the game wasn’t officially over yet, the Blackhawks going short-handed with 2:11 was the final nail in the coffin. And neither side did anything over the final 131 seconds to close out the game.

52 thoughts on “Bolts Blow Away Blackhawks Behind Third Period Outburst”