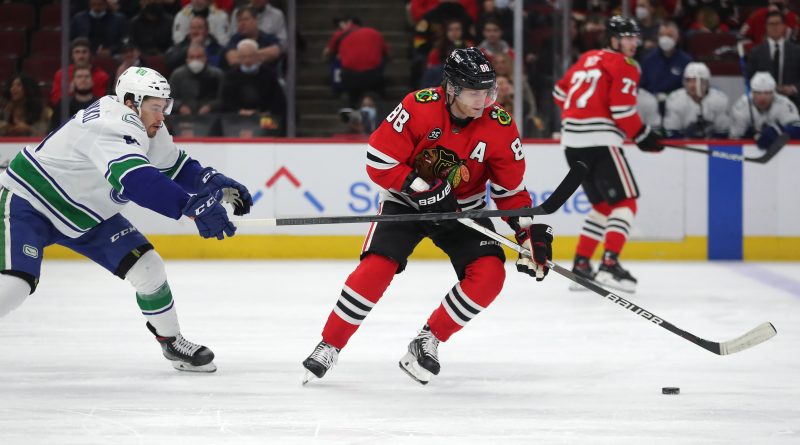 The Vancouver Canucks came into the United Center losers of seven of their last ten. They scored nine goals total in their previous five games — and five of those came in a 5-1 win at the Jets.

So the Blackhawks let the offensively challenged Canucks skate circles around them for 40 minutes.

Chicago was out-shot 11-6 in the first period. They were out-shot 10-8 in the second period. And the Blackhawks blocked 20 more shots in the opening two periods. They didn’t have the puck much, and when they did they either turned it over or put a mediocre shot on net that had no follow-up.

And they were doing this with Jaroslav Halak in net for the Canucks.

And the Blackhawks had two and a half penalties of advantage time.

Alex Chiasson scored for the Canucks in the first and Brock Boeser added one in the second.

Saying the effort from the Hawks was flat would be giving them too much credit. They were curing insomnia.

It took 13 minutes of the third period for anything to change on the scoreboard. Finally, the Blackhawks generated something positive. And it was Connor Murphy with the Hawks’ first goal to cut the lead in half.

Game on, kids! Patrick Kane picked up the only assist on the Murphy goal.

But we aren’t allowed to have nice things, remember, so the Hawks got caught with too many men on the ice with 3:07 left in regulation chasing one goal. So they went to the penalty kill with limited time remaining in regulation.

The Hawks killed the penalty, the goalie sprinted to the bench and… nothing. Luke Schenn found the empty net from about ten feet in front of his own net to extend the lead back to two with 20.6 seconds left in regulation.

And that’s where it ended. A boring, lackluster effort ended with another in the loss column.

Marc-Andre Fleury stopped 29 of 31 shots. He wasn’t the problem. The skaters in front of him blocked a season-high 30 shots.

Which means… the Hawks spent most of the night playing defense.

Jake McCabe and Calvin de Haan were credited with seven blocks each.

Two Blackhawks — Kane and Murphy — had more than two shots on net in the game.

MacKenzie Entwistle was credited with six hits. Which is nice.

Dylan Strome won seven of 12 at the dot. His improvement has been really good to see lately. Unfortunately there was no offense from anywhere on the Hawks’ roster, but he’s been much better this month.