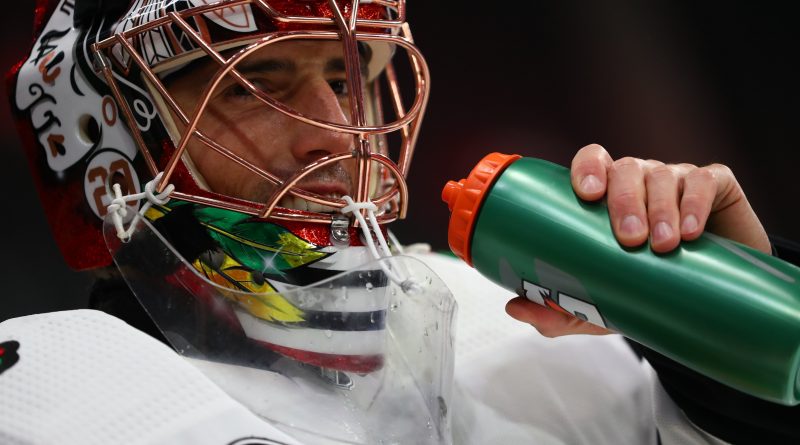 On Monday night, the Blackhawks took a group that was pretty close to a possible opening night roster to Detroit for a preseason game.

Tyler Johnson was between Alex DeBrincat and Patrick Kane as the top-line center and Jonathan Toews was between Philipp Kurashev and Dominik Kubalik again. The defensive group included Seth and Caleb Jones, Calvin de Haan, Connor Murphy and Jake McCabe; Jakub Galvas was the lone prospect on the back end.

So you would hope the Blackhawks would look better. And they did… for 20 minutes. Chicago sprinted to a dominant three-goal lead after the first period, but had only a 4-3 lead after two periods. Three minutes into the third period, the Red Wings tied the game with their powerplay goal of the night. The Hawks scored the final two goals of the night to earn the regulation victory (though there was a pre-scheduled shootout at the end).

As we have done throughout this postseason, we aren’t going to get into an incredibly in-depth breakdown of a preseason game but there were a number of things that stuck out from Monday night’s game.

Brandon Hagel was the best player on the ice for Chicago. All of the puck-attacking effort that fans fell in love with last year was on full display on Monday night. He saved a couple icing calls and set up Mackenzie Entwistle for a pretty goal in the second period. With the game tied in the third, Hagel forced a turnover that turned into another rush with Entwistle, who scored his second of the night off another pretty pass from Hagel. Hagel finished the night with three assists. How and where Jeremy Colliton puts Hagel will be interesting to follow this season because he has value up and down the lineup.

Mackenzie Entwistle has had a nice camp. There are simply too many bodies for him to make the NHL roster to start the season, but he looked pretty good late last season; he scored one goal with one assist in five games. He showed good instincts again on Monday night and has a nice release. The Hawks may have picked up a gem in the deal that sent Marian Hossa’s contract to Arizona in 2018.

The Blackhawks penalty kill sucks. Detroit scored on four of the Blackhawks’ first five penalties and had 15 shots on net in those five powerplays. If the Blackhawks have any prayer of being a playoff team, they have to be better than this when short-handed.

Jonathan Toews had another good night. He wasn’t asked to skate as many minutes as he did earlier in the preseason, but he looked strong again. He had the primary assist on the Blackhawks’ first two goals of the night and won the majority of his faceoffs again (11 of 16). He added a third assist on DeBrincat’s empty-net goal in the final 13 seconds of regulation.

The Seth Jones – Jake McCabe pairing needs work. A lot of it. They haven’t looked to be in-sync yet at all in preseason game action.

Henrik Borgstrom is one of my top-four centers on the roster right now. He had a great night at the dot (won eight of 11) and Colliton put him on the zone for a defensive zone draw with Detroit’s net empty late in the game. It’s clear Colliton is in love with the idea of Tyler Johnson being one of his centers, but Borgstrom has shown value this preseason. If your four centers are Toews, Johnson, Kirby Dach and Borgstrom on Opening Night that’s an enormous upgrade from every game last year.