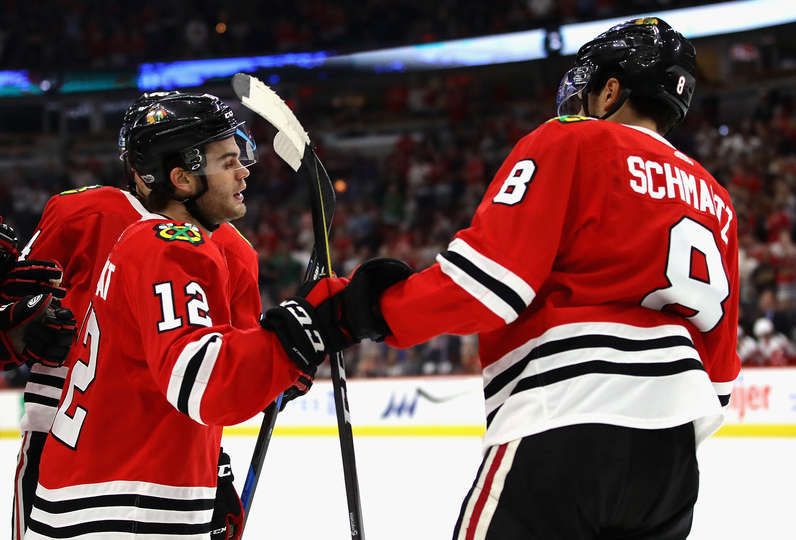 The Blackhawks returned to the United Center ice on Thursday night.

As a team, it was great for fans to see the team back on the ice. But even during warm-ups it felt right to see Brandon Saad wearing #20 in red and Patrick Sharp back in #10 with the Indian head on his chest.

Saad had an OK night.

No matter the game, a hat trick is a hat trick.@BSaad20 picks one up in a preseason W. #LoveThisGame pic.twitter.com/sQBeHJKCoc

Sharp, coming off season-ending hip surgery, skated 13:36 with two assists, two hits, two shots on goal and one takeaway. He started the night on a line with Artem Anisimov and Ryan Hartman that looked good.

One of the areas of particular interest to more than just Blackhawks fans was how the new look line of Alex DeBrincat, Nick Schmaltz and Patrick Kane looked together. In game action for the first time, many wondered how Schmaltz would look at center with two snipers on his wings.

The line clicked early, showing some great passing between the younger forwards and Kane. And eventually it got on the board when DeBrincat scored against NHL competition for the first time.

Richard Panik was credited with three assists on the top line with Saad and David Kampf, skating in place of an ill Jonathan Toews. Even without the captain, the combination of Panik and Saad looked good.

Brent Seabrook added the eventual game-winning goal early in the second period. Newcomer Connor Murphy skated primarily with Duncan Keith and was credited with three shots on net and two hits in 21:02 on the night.

Jordan Oesterle looked solid in his first action with the Blackhawks. Unfortunately, Luc Snuggerud left the game because of injury.

Corey Crawford played two periods, stopping 30 of 31. Collin Delia stopped all eight shots he faced in one period of action.