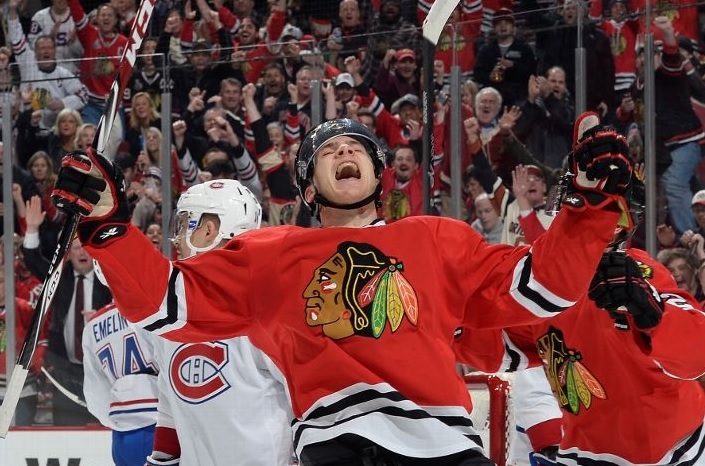 It wasn’t pretty, but a goal from Brandon Saad with 27 seconds left in the third period gave the Blackhawks their fifth straight win. In the first period, it was some of the unusual suspects picking up the offense for the Hawks. Michal Rozsival jumped into the rush and converted a nice pass from Bryan Bickell to put the Hawks up 1-0. It was Rozsival’s first of the year.

In the final two minutes of the opening period, both teams found the back of the net. The Hawks’ fourth line put a puck into the net. Ben Smith scored his second of the year, and you can tell from his reaction (see photo above) that he was relieved to get back into the scoring column. Smith and Kruger, who had the primary assist on the play, continue to be arguably the best penalty killing pair of forwards in the league, leading the Hawks’ NHL-best PK unit.

Unfortunately, Brendan Gallagher scored 26 seconds later to cut the Hawks’ lead in half.

That goal sparked the Montreal offense and carried into a strong second period. The Habs picked up goals from two defensemen – Sergei Gonchar and PK Subban – in the middle frame to take a 3-2 lead into the game’s final 20 minutes. Subban’s goal came 13 seconds into a Montreal power play after Patrick Kane “tripped” Brandon Prust, who was later shown to have gone down on his own but still got the call.

If the second period belonged to the Canadiens, the third saw the Blackhawks capture just enough of the momentum to get the game tied, and eventually a bouncing puck found its way into a game-winning goal.

Jonathan Toews scored a power play goal at 4:18 to tie the game. His goal came 13 seconds into the Hawks second power play of the opening minutes of the final period; Alexei Emelin spent the first two in the box for tripping Marian Hossa at the horn closing the second period, and PK Subban was in the box for hooking when Toews scored.

The teams traded chances, and Antti Raanta was lucky (and got some help) to keep the game tied. In the end, a bouncing puck found Saad and he unloaded for his fifth of the season and a game-winner with only 27 seconds left in regulation.

Raanta was good enough to earn the win, allowing three goals against 41 shots in the game. Carey Price took the loss, allowing four against 36 shots.

Bickell picked up an assist on Rozsival’s goal and was credited with one blocked shot and one hit, but once again was one of two Blackhawks skaters to finish with less than 10 minutes of ice time; Daniel Carcillo and Bickell took only 10 shifts each in the game.

Toews led the way, winning 13 of 23 faceoffs after winning only three of his first ten. Chicago’s captain was credited with the secondary assist on Saad’s game-winner to go with his own game-tying goal and led Hawks forwards skating 22:12 in the game.

Kane and Kris Versteeg continued their point production, each picking up an assist on Friday night. Brad Richards also had an assist and won nine of 13 faceoffs in the game. Kruger, Nordstrom and Shaw also picked up helpers in the victory.

The Hawks will have to turn around and bring a better effort on the road on Saturday night in Nashville against the division-leading Preds.

Before the game, the Blackhawks showed their usual amount of class by observing a moment of silence for an Original Six opponent that the entire hockey world respected, Jean Beliveau.

14 thoughts on “Brandon Saad, Blackhawks Escape With Another Win”