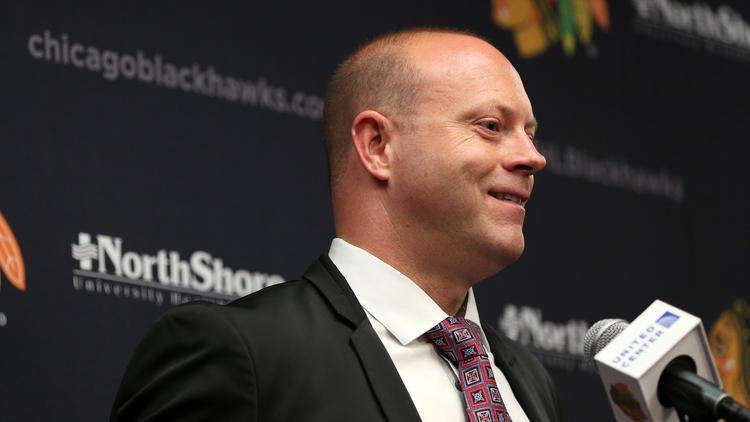 It was a busy Monday for Chicago Blackhawks GM Stan Bowman, who took part in his first NHL Trade Deadline without John McDonough. He made three trades before the team takes the ice for an important game in Columbus.

First, the deal he didn’t make.

Nikita Zadorov stayed put in Chicago. Blackhawks were listening but nothing made them blink. They’re happy to keep him.

Zadorov is staying through the rest of the 2021 season. He’s an RFA this offseason and would need to be re-signed if the Blackhawks are going to expose him in the Seattle expansion draft.

Per multiple reports, including the one cited above, the Hawks listened on Zadorov but didn’t hear something they liked in return.

Now, the deals Bowman did make.

So what do we make of these four trades?

The draft capital the Blackhawks acquired is terrific. An additional second round pick this year and moving a fifth up to a third in the deal with Vegas will pay dividends down the road. Getting those two picks for Janmark, a rental, is a win for Bowman. Moving up from the fifth round to the fourth for Bowey is also a huge win for Chicago.

Gaudette is the only piece the Hawks acquired that could impact the roster this season. He’s a skilled forward who won the Hobey Baker in college and could be a welcome addition to the Hawks’ bottom six when he’s ready to join the lineup. He’s an offensive upgrade from Highmore. That deal is a win.

The key to the Söderberg deal is Rolston, a rising sophomore at Notre Dame where he played with Blackhawks prospect Landon Slaggert this season. He was selected two picks before Chicago picked defenseman Isaak Phillips, who the Hawks signed to an ELC recently. He’ll get more ice time with the Fighting Irish in the coming year(s), so his value to the organization is wait-and-see. But Söderberg was another rental who was brought in to help the team deal with the losses of Kirby Dach and Jonathan Toews at center this season.

Overall, Bowman did a nice job at the deadline. He got the value we had hoped for in the Janmark deal and brought back intriguing assets in the other three trades.