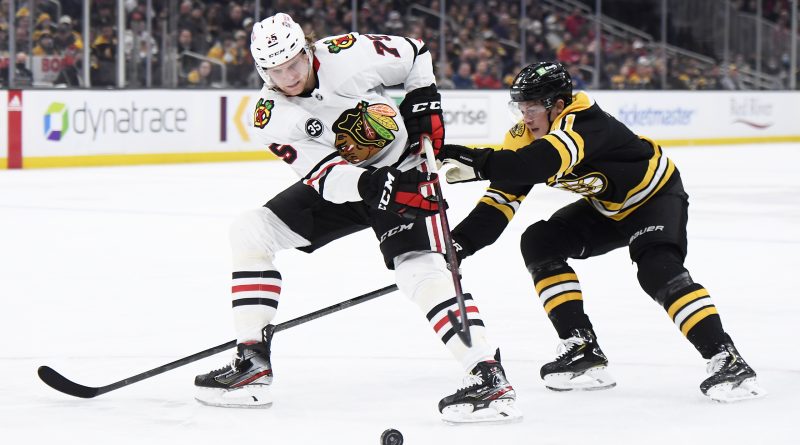 Yup, go ahead. Make your comments about the significance of 17 seconds when the Blackhawks are in Boston. Why not? Those are fond memorie. s.

This ain’t that team.

But there were a few nice takeaways from the Blackhawks’ 4-3 loss in Boston on Thursday night even though they allowed the game-winning goal with 17 seconds remaining in regulation.

Brandon Hagel scored two more goals, giving him an even 20 on the season. His play continues to impress all over the ice. I know his name has been thrown around as we near the trade deadline, but he’s the kind of player you want on your roster as you start building the next generation of Blackhawks.

The line of DeBrincat-Strome-Kane was relied on heavily on Thursday night and they earned it. All three skated more than 23 minutes in the game. Strome picked up an assist and won 12 of 25 faceoffs, taking by far the most on the roster (Jonathan Toews won seven of 18). After they combined for 14 points against Anaheim they combined to put 10 shots on net on this night (six from DeBrincat) and four points (one assist for all three and a goal from DeBrincat).

Dominik Kubalik was limited to 7:23 on the ice, 2:01 of which came on the power play. It’s increasingly hard to imagine the Blackhawks wouldn’t move him at the deadline if a decent offer was made.

Tyler Johnson skated only 7:46 with 2:44 coming on the advantage. He failed to register a shot on goal… or anything else in the box score but a negative-one rating.

Philipp Kurashev skated a team-low 5:05 and, like Johnson, failed to make an impact on the box score.

Kirby Dach had an assist, one hit and one takeaway while winning one of his two faceoffs in the game. He skated 17:31.