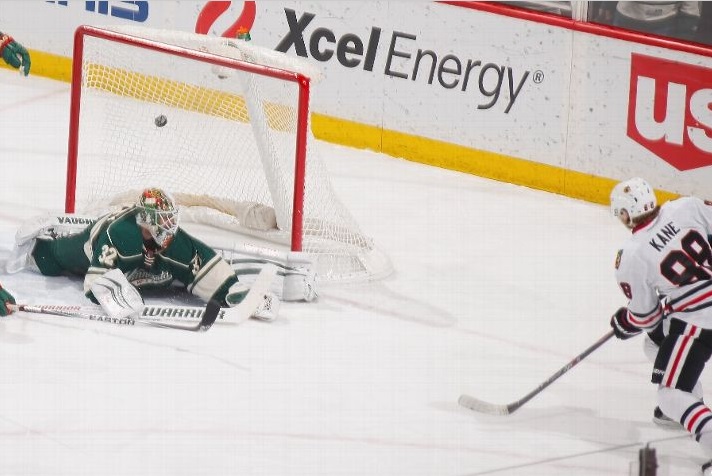 For the first time in seven games, the Chicago Blackhawks scored first and were able to withstand a strong second period to pull away with a 4-2 win in Minnesota on Thursday night.

After a shaky opening 75 seconds on Tuesday, Corey Crawford played a much better game in Minnesota. He made a big save in the first minute to keep the Wild off the board and appeared much more confident than against Colorado. Patrick Sharp opened the scoring at 5:08 for his ninth of the season. Later in the period, Thomas Vanek drove Marcus Kruger chin-first into the boards in front of the Hawks bench and received a five-minute major for the infraction. On the ensuing power play, Patrick Kane scored his 20th of the season to extend the Hawks lead to two.

With the goal, Kane became only the second player in Blackhawks history to score at least 20 goals in each of his first eight seasons (Denis Savard).

Kruger returned for the second period, but the Wild carried the action in the middle frame. Jason Zucker scored 63 seconds into the period to cut the lead in half, and the Wild dominated the puck for nearly the entire 20 minutes. Helped by two Sharp penalties, Minnesota out-shot the Hawks 19-5 in the second period but Crawford was able to keep the Hawks in front with a number of key saves.

Bryan Bickell extended the lead back to two with his seventh of the season, the eventual game-winner, and added an empty net goal for good measure in the final minute. The goals extended a stretch of strong play from Bickell, who has four goals and an assist over his last five games. He also led the Hawks with four shots on net in the win.

And with his assist on Bickell’s first goal, Kane picked up his first multi-point game since Dec. 27, and now has four points in four games in 2015. Brad Richards was credited with two assists in the game, his second multi-point outing in three games.

Minnesota pulled back to within one during a 5-on-3 late in the third period. With Johnny Oduya already in the box, and Brent Seabrook bleeding from the eye area on the ice in a scrum in front of the net, Michal Rozsival closed his hand on the puck and was sent to the box. With the Hawks down three defensemen for 35 seconds of a two-man advantage, it took Minnesota only seven seconds to score. Jason Pominville was credited with the goal; he continues to haunt the Blackhawks, picking up a two-point night in the loss.

Seabrook led the Hawks with five blocked shots and skated 22:32 before needing some facial repairs in the third period. Jonathan Toews won 13 of 21 faceoffs and was credited with one assist and one blocked shot as well.

Crawford finished the night with 42 saves as the Hawks were out-shot 36-9 over the game’s final 40 minutes. Niklas Backstrom allowed three goals against only 19 shots in the loss for Minnesota. Chicago scored on one of three power plays, while limiting the Wild to one power play goal on five advantages.

Daniel Carcillo dressed in place of Teuvo Teravainen and skated exactly eight minutes in the game, producing one shot on net and one hit. David Rundblad picked up an assist in the game but was the lowest ice time recipient on the roster, getting only 7:55 on the ice on Thursday night. Wild star Zach Parise did not play in the game on Thursday night after his father, JP Parise, passed away after a long battle with cancer on Wednesday night. Our thoughts and prayers are with the Parise family.