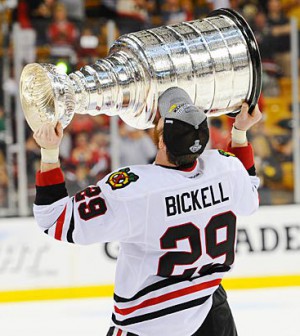 On Saturday, the Carolina Hurricanes announced former Blackhawks forward Bryan Bickell will retire at the end of the 2016-17 season.

Bickell, 31, was diagnosed with multiple sclerosis in November. He will skate in the last game of his career on Saturday night when the Canes host St. Louis.

We heard you! All proceeds from #BickellBrave shirts to the Bryan & Amanda Bickell Foundation's new MS initiative. https://t.co/ilZIFuKWXj pic.twitter.com/IVlxOHLCLE

Earlier on Saturday, Bickell was surprised by his Carolina teammates.

[WATCH] @bbicks29 made plans to participate in this morning’s #WalkMS, but he didn’t expect his teammates to all show up. #BickellBrave pic.twitter.com/zy2emeM9nZ