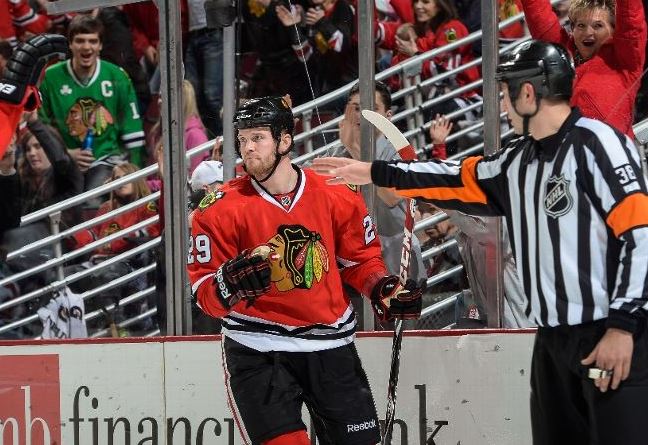 For the first time since they joined the NHL roster, the Chicago Blackhawks played a game without Patrick Kane and Jonathan Toews because of injury. The Hawks were also without Michal Rozsival and Johnny Oduya (lower-body) was scratched after warm-ups.

Even with those key veterans – and Teuvo Teräväinen – sitting out, the Hawks were able to end the losing streak. The lineup looked more like a 2006 Blackhawks unit than that of the defending champions, with Andrew Shaw the top-line center and recently recalled Joakim Nordstrom starting the game on the second line. Jeremy Morin and Peter Regin were both in the lineup as well as the Hawks needed every healthy body to contribute after losing four of their last five in regulation.

Charlie Coyle tipped a shot that had already been redirected by Niklas Hjalmarsson past Corey Crawford in the first period to give Minnesota a 1-0 lead. The Hawks looked awkward and mediocre in a first period that saw the home team get only five shots on net.

Ben Smith opened the scoring for the Hawks with his 11th of the season, tying the game in the second period. Smith and Brandon Saad were both in front of Ilya Bryzgalov when Nick Leddy put a shot on net, and Smith put a rebound home.

Bryan Bickell, who hadn’t played since March 19, scored for the first time since March 6 after Morin made a great play to win the puck. It was Bickell’s 11th goal of the year, while the assist was Morin’s first point in the NHL since Dec. 8.

Unfortunately, Erik Haula scored a tying goal with 1:54 remaining in regulation and the Hawks skated through a scoreless overtime period.

Rundblad was pressed into action with Oduya out, and was also credited with three blocked shots in 9:21 on Thursday night. Sheldon Brookbank skated over 25 minutes in the win.

Bickell skated only 9:56 in the game, and Morin was limited to a team-low 8:56 in spite of a good evening.

Crawford continued his strong play, making 25 saves in 65 minutes of hockey, while Bryzgalov made 24 saves. In the shootout, Crawford made three stops and Marian Hossa’s goal held up as the game-winner.

The Hawks travel to Columbus for a Friday night showdown with the Blue Jackets, who won in Philadelphia on Thursday night.