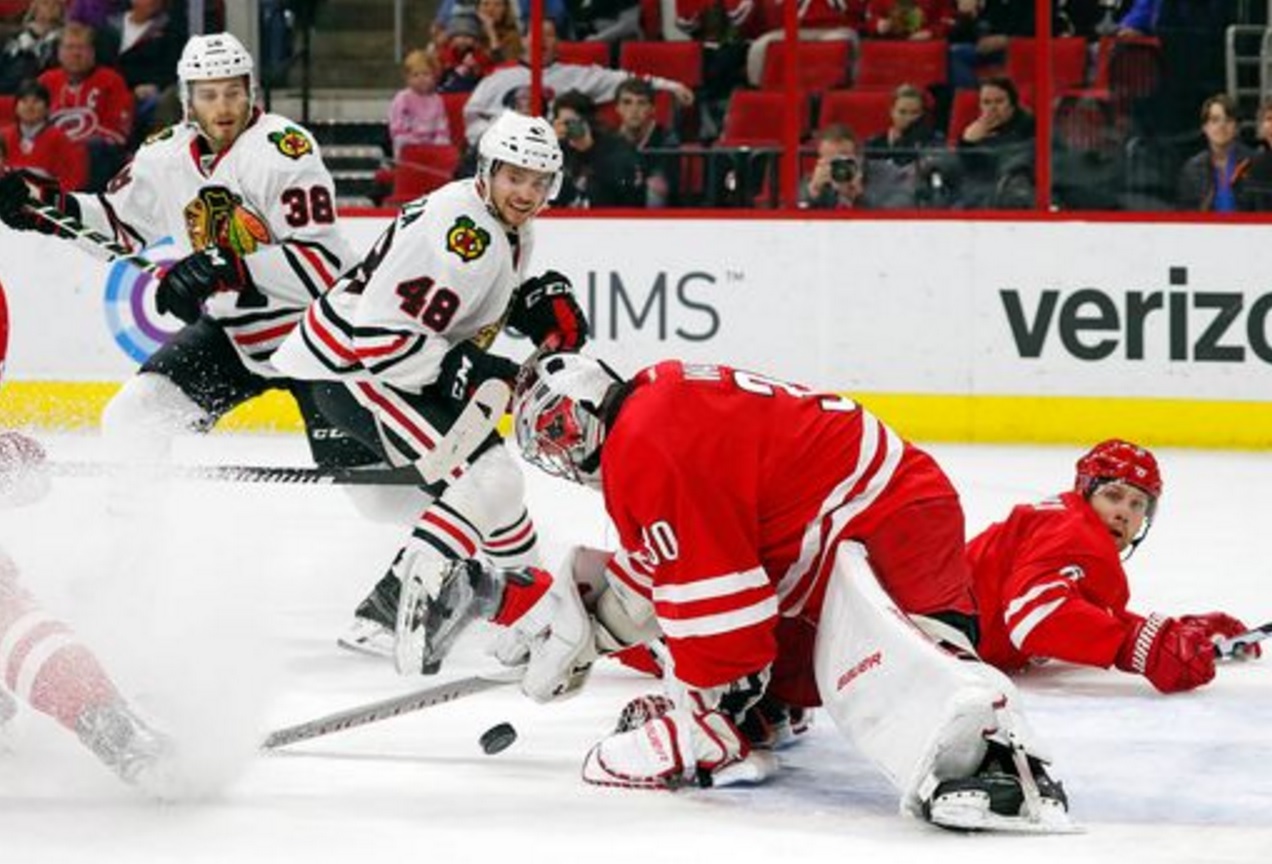 Facing off against former Hawks forwards Teuvo Teravainen, Joakim Nordstrom and Viktor Stahlberg and defenseman Klas Dahlbeck, Chicago would try to end 2016 on a high note.

And 6:36 into the first, Kempny scored his first career goal in the NHL.

Unfortunately, the lead wouldn’t last two full minutes. Elias Lindholm scored his fourth of the year at 8:32 and Lee Stempniak gave Carolina a 2-1 lead 65 seconds later. Teravainen picked up an assist on the Stempniak goal.

Chicago had the only power play of the first period, but were out-shot 16-8 and trailed after 20 minutes.

The Hawks flipped the script in the second period and carried the majority of the action, but failed to beat Cam Ward. Chicago killed the only penalty of the period, but were able to out-shoot Carolina 10-7. Darling made a few big saves to keep the Hawks within one, one being a huge save against Stempniak late in the period.

And, through 40 minutes, the Hawks trailed 2-1 in Carolina.

Late in the second, Marcus Kruger disappeared from the Hawks bench. His final shift ended with 3:39 remaining in the second, and he did not return for the third period. Carolina announced early in the third that Lindholm was done for the night as well with an upper-body injury.

Jay McClement expanded the Carolina lead to 3-1 at 2:54 into the third. Though it was officially scored as unassisted, Patrick Kane could have received a helper for his turnover that led to the McClement goal.

Less than three minutes after the McClement goal, Vinnie Hinostroza posted up in front of the net. Jonathan Toews put a missile on net and Hinostroza did the rest, getting the Blackhawks back to within 3-2 with 14 minutes left in regulation. The assist was Toews’ second of the night; Kempny also picked up his second point of the night with an assist on the Hinostroza goal.

Darling went to the bench with two minutes left for the extra attacker and the Blackhawks put together an extended offensive attack that lasted through the final horn. But they weren’t able to beat Ward, and the Hawks close out the calendar year with a 3-2 loss.

Darling made 25 saves in the loss, while Ward 27 to earn the victory. Artemi Panarin’s nine-game point streak came to an end.

The Blackhawks will now head to St. Louis for the Winter Classic. While Quenneville indicated earlier on Friday that the HAwks hope to have Marian Hossa in the lineup against the Blues, his postgame comments don’t look good for Kruger.