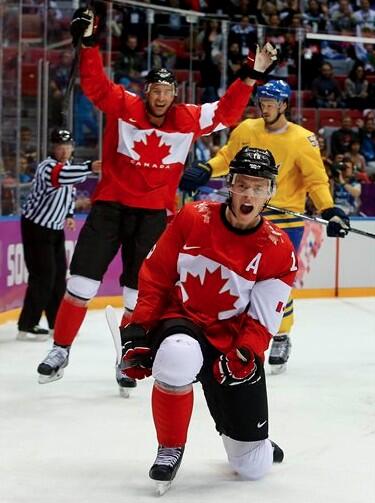 Jonathan Toews and Duncan Keith now have as many gold medals as they do Stanley Cup rings.

Toews scored the game-winning goal at 12:55 into the first period. Sidney Crosby and Chris Kunitz added goals in the second and third periods as Canada won the final game of the tournament 3-0. Carey Price made 24 saves in the shutout.

Keith skated 20:32 in the gold medal game, while Patrick Sharp found himself at the end of the bench; he got only five shifts. But all three Canadian Blackhawks will come home healthy with gold medals.

For Sweden, Marcus Kruger played a very strong game. He won 11 of 22 faceoffs against a group of all-world centers and his line provided most of the offensive chances early in the game. With Niklas Backstrom out of the game, Kruger skated 17:46 in defeat.

Niklas Hjalmarsson skated 18:03 and Johnny Oduya was on the ice for 12:21 in the gold medal game. All three Blackhawks that represented Sweden will return to Chicago healthy with silver medals.