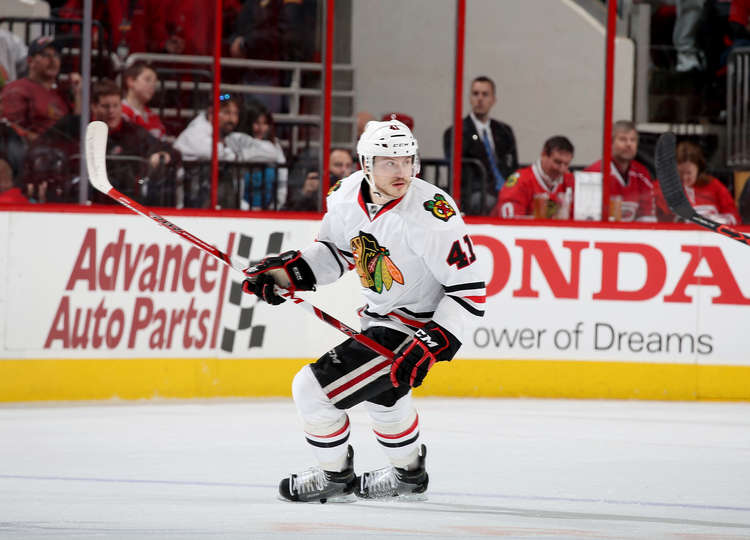 The Blackhawks performance on Tuesday night was great…

Chicago did absolutely nothing offensively in the first period and allowed goals to Jeff Skinner, Riley Nash and John-Micheal Liles as Carolina sprinted to a 3-0 lead. The Canes did a nice job of getting traffic in front of Hawks starter Corey Crawford, and were tipping almost every shot on net. The first two goals appeared to change directions a couple times on their way to the net, and Liles completed a 2-on-1 with Kris Versteeg to push the lead to three.

Scott Darling jumped into the fray to start the second period and received the same amount of support Crawford did in the first. Former Blackhawks forward Joakim Nordstrom beat Darling at 10:51, and Nash added his second of the night – only his fourth of the season – just 93 seconds later to make the score 5-0.

All four of Carolina’s forward lines factored into the scoring.

The Hawks were being out-shot 25-12 when Nash scored Carolina’s fifth goal of the night. And Eddie Lack had only needed to make a couple decent saves through 35 minutes of action.

Sadly, this five-goal deficit wasn’t treated with the same disregard as Calgary’s seemingly insurmountable lead in 2009.

You can blame the schedule or the flu working its way through the roster. You can say Hawks had mentally and emotionally started their All-Star Break a few hours early. But there wasn’t much worth watching from the team in white on Tuesday evening.

The third period came and went like a fart in an elevator.

Final shot totals were 40-26 in favor of the Canes. Darling stopped 21 of 23 in a relatively decent outing for the final 40 minutes.

In his NHL debut, Mark McNeill skated 11:51 and led the team with three hits. He also had one takeaway and looked comfortable considering the circumstances (read: nobody else showed up).

19 thoughts on “Canes Blow Away Blackhawks”