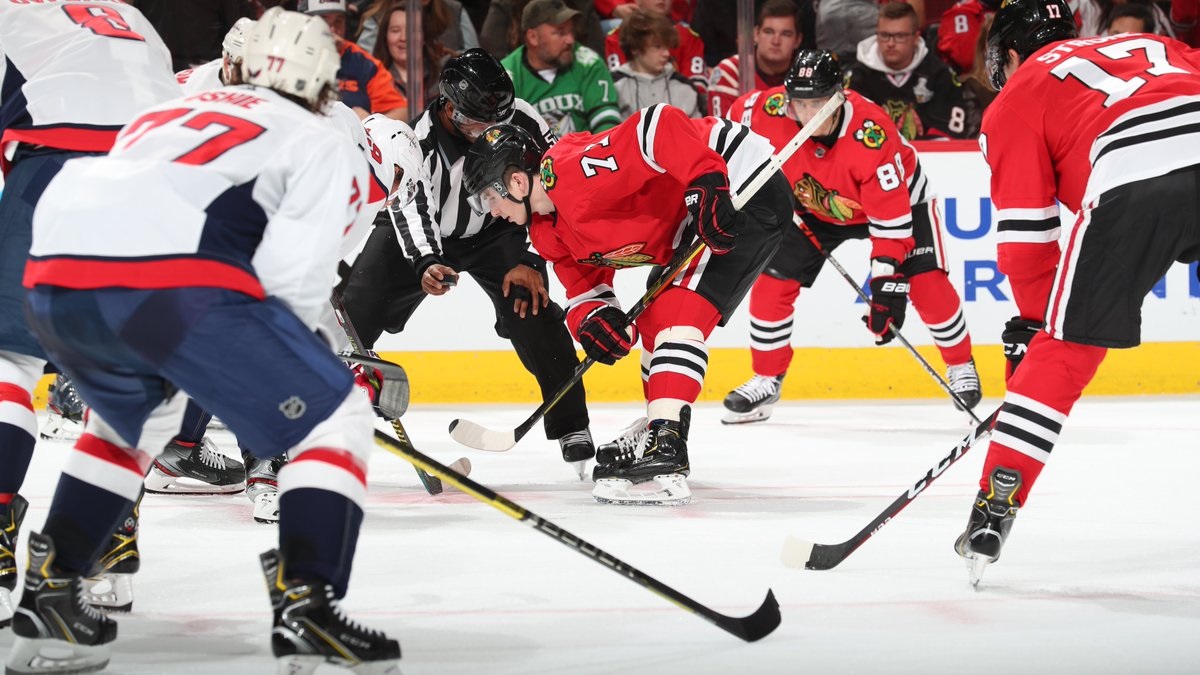 There was an anticipation at the United Center on Sunday night that had been lacking for a couple years. Kirby Dach, the third overall pick in the 2019 NHL Draft, made his NHL debut.

And he started the game centering a line with Patrick Kane and Dylan Strome. Against the Ovechkin line for the Caps.

Pretty heavy stuff for the youngest player to make his NHL debut for the Blackhawks since Kane more than a decade ago.

It’s worth noting that Dach won the opening faceoff of the game.

The only goal in the first period belonged to T.J. Oshie, who scored a power play goal while Andrew Shaw was in the box in the middle of the period. Chicago had a 14-12 shot advantage after 20 minutes but trailed on the scoreboard.

At the end of the first period noted goon Radko Gudas jumped Conner Murphy. Murphy picked up a minor penalty but Gudas picked up a double-minor for his efforts.

Chicago did nothing on the power play, their second failed advantage of the night.

The Blackhawks’ fourth line of Ryan Carpenter, Alex Nylander and Drake Cagguila was tremendous all night. Eight minutes into the second Carpenter put a shot on net. Nylander grabbed the loose puck and made a terrific pass to Cagguila who put home the tying goal.

One minute after the Cagguila goal Chandler Stephenson hit Dach in the face and picked up four minutes of penalty time. This would be the turning point of the game. Nic Dowd scored short-handed less than 30 seconds into the extended advantage to give the Caps a 2-1 lead. The Blackhawks didn’t score over the final 90 seconds of the power play.

The Blackhawks out-shot the Capitals 15-9 in the second period. Chicago had an eight-shot advantage after 40 minutes but trailed on the scoreboard again as they went to the room for a conversation.

Alex Ovechkin scored at 3:52 into the third to give Washington a two-goal lead. Chicago needed some pushback and they put together a strong effort after the Ovechkin goal.

Dominik Kubalik had a strong night offensively and cut the lead to one at 6:05 into the third.

Kane tied the game at 9:58 off another dish from Nylander.

Ten minutes into the third the Blackhawks had evened the score. Unfortunately the Caps had more offense in the second half of the third.

Tom Wilson scored at 11:47 and Lars Eller added one into the empty net with 50 seconds left in regulation to make the final score 5-3.

For Dach it was a big first night in the NHL. He was on the ice for Ovechkin’s goal and finished the night minus-one. He had one blocked shot and showed the ability to use his size to get and control the puck at times. Dach skated 13:41 in the game and won just the one faceoff – his first in the NHL – in five faceoff chances.

The Strome-Dach-Kane line was on the ice together for 12:27, the most of any combination in the game for Chicago. They generated only two shots on net but Washington got only four on net while that trio was on the ice.

Kubalik led the team with ten shots on net in the game. He was also credited with two hits and one takeaway in 14:15. David Kampf won six of 13 faceoffs with two shots on net and Brandon Saad put five shots on net as the third line continued to look good. The Kubalik-Kampf-Saad line was on the ice for 16 shots for and only five against.

The fourth line was the best on the ice for Chicago. Carpenter had one assist and finished plus-two in 12:40. He won ten of 12 faceoffs and was credited with two hits and one takeaway. Nylander had two assists and three takeaways in 13:12. And Cagguila added one hit to his second goal of the season.

Chicago’s blue line failed to produce a point in the loss. Calvin de Haan led the way with three blocked shots while Murphy had a team-leading four hits.

Corey Crawford allowed four goals against 29 shots. He made some good saves and didn’t face the volume of shots that he has recently.

Braden Holtby reminded us why he’s a Stanley Cup winner. He stopped 41 of 44 in the win.

The Blackhawks power play was 0-5 in the game.