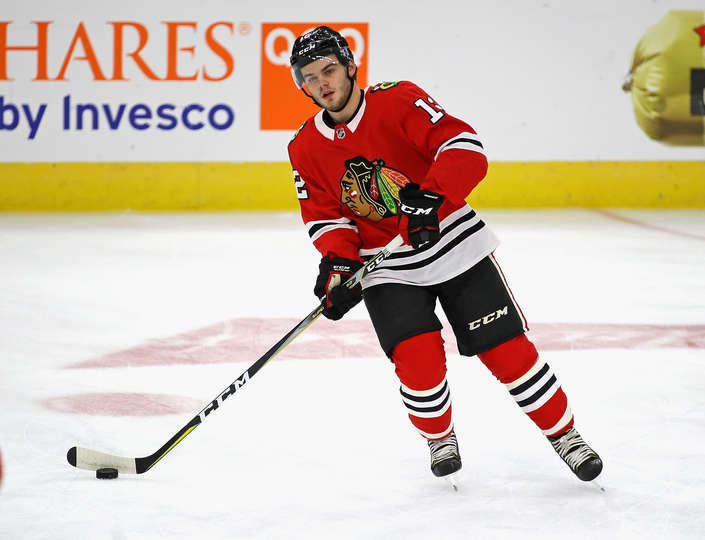 Yesterday we looked ahead at the Blackhawks crop of prospects from the 2017 NHL Draft. Now let’s catch up with the Class of 2016.

DeBrincat has bounced all over the lineup but he enters the All-Star Break second on the team with 17 goals and has as many points (32) as Jonathan Toews.

“He’s always been a really good, gifted player and had the puck an awful lot. But most kids as they climb the hockey ladder, they haven’t had to defend a lot because they’ve had the puck a lot. At the higher level you have to play both ends of the rink. He had better defense, particularly off the rush and he did a better job down low defending. He also did a better job getting involved offensively.” – BU coach David Quinn

“Everything that excited the Blackhawks about him at the draft, he’s shown while playing for Russia in the World Juniors. He’s skated around defenders. He’s possessed the puck. He’s created for himself and others. He’s produced. With three goals and two assists during four games in pool play, he was second on Russia in goals and tied for second in points. He’s tied for 12th in points among all tournament players.” – Scott Powers, The Athletic

“This season, [Carlsson] is making his presence known in the Swedish Hockey League. And not just for his defense, but for his improved offensive game as well. ‘He’s more mature, more comfortable,’ a Blackhawks scout said. ‘He’s getting more ice and responsibility and making the most of it. He’s having a solid year.’” – Scott Powers, The Athletic

Noel signed his entry level contract with the Blackhawks in April.

“The 20-year-old centre missed all of the Blackhawks’ main training camp after suffering a knee injury during a September prospects tournament. He eventually resumed playing with Chicago’s ECHL team, the Indy Fuel, and was having a decent run with the Indianapolis-based Fuel, with four goals and five assist in 17 games.” – Brenden McCarthy, The Telegram

Hillman was named Bauer NCHC Defenseman of the Week on Jan. 8.

Ryczek left Providence mid-season to play in the QMJHL.

6 thoughts on “Checking in with the Blackhawks 2016 Draft class”