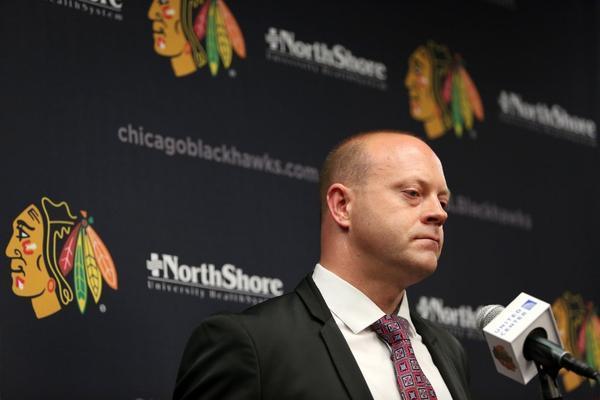 Heading into one of the most hyped drafts in recent memory, many figured the Blackhawks would be active as they try to shed veterans with big cap hits (Patrick Sharp and Bryan Bickell, specifically).

But when the dust settled and the final name – a Hawks selection – was called, Chicago hadn’t made a deal and used only the picks they owned coming into the weekend.

Here’s a look a the players who have joined the Chicago Blackhawks organization.

2nd round – 54th overall: Graham Knott, LW, Niagara IceDogs (OHL)
6-4, 190
DOB: 1/13/1997
2014-15 season: 59 games, 25 goals, 18 assists, 43 points
#57 North American Skater in final Central Scouting rankings.
Profile from EliteProspects.com – “A big-bodied power winger whose net front presence pays dividends at the end of the night. Strong skater, but could work on his acceleration with the puck. Transitions well and, as previously stated, likes to hang around the net and cause havoc. Good shot and, usually, quite accurate. All-in-all, the prototypical power winger that has the skill and determination to make an impact each shift.”
NHL.com Draft Profile

5th round – 151st overall: Radovan Bondra, RW, Kosice HC (Slovak)
6-6, 220
DOB: 1/27/1997
2014-15 season: 15 games, 2 goals, 2 assists, 4 points
#34 International Skater in final Central Scouting rankings
Profile from EliteProspects.com – “A hulking power winger that plays a skill game, Bondra is a shifty skater blessed with predatory offensive instincts and a nose for the net. Good puck-handling ability; protects the puck exceptionally well with his size. Could be more physical, but that will come. All-in-all, a talented scorer that can be very difficult for the opposition to contain.”
NHL.com Draft Profile

6th round – 164th overall: Roy Radke, RW, Barrie Colts (OHL)
6-3, 203
DOB: 12/10/1996
2014-15 season: 64 games, 9 goals, 9 assists, 18 points
#104 North American Skater in final Central Scouting rankings
Born in Geneva, IL. Posted 40 points in 49 games at Shattuck St. Mary’s during the 2013-14 season.
Profile from EliteProspects.com – “Radke has good size and plays well in all three zones. He has a good nose for the net bu can also move well on the outside. Playing third line minutes this season, he still found ways to contribute and is poised for a much improved year statistically next season.”
NHL.com Draft Profile