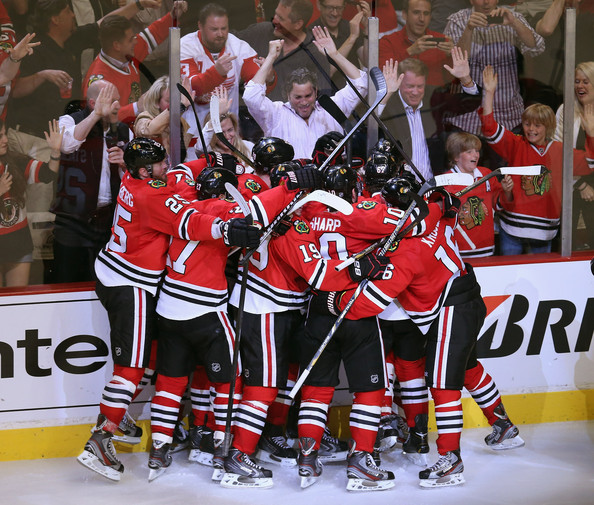 The Blackhawks put the finishing touches on a historic comeback, overcoming a physical game and a blown call with less than two minutes left in regulation, and sent the Red Wings to the golf courses with an epic overtime victory.

For those that had questioned Corey Crawford’s ability to win a series for the Blackhawks, the Chicago netminder played a phenomenal Game Seven. He allowed only one goal, to Henrik Zetterberg in the third period, against 27 shots in over 63 minutes. The Red Wings had a number of good scoring opportunities, but Crawford slammed the door shut.

In the series against Detroit, Crawford allowed 14 goals and posted a .929 save percentage.

Coach Joel Quenneville continued with the lineup that had worked well in the two previous games, and received similarly solid performances from all over his lineup.

Meanwhile, Viktor Stalberg’s speed created a number of scoring chances; his six shots were the high total on the night. Stalberg did skate himself out of position a few times, but the third line continued to create opportunities and control the puck in the offensive zone late in the game.

On the second line, Bryan Bickell had five hits, three of which came in a first period, and was also credited with two takeaways in the game. Michal Handzus was credited with three hits and won seven of 16 faceoffs in the game; Pavel Datsyuk picked his pocket on a couple occasions, but strong play by Crawford and the Hawks defensemen kept the turnovers from impacting the scoreboard.

On the fourth line, Marcus Kruger and Michael Frolik continued to be dominant penalty killers. Kruger led the Hawks with four blocked shots in the game, and Frolik had as many scoring chances as the Red Wings while Detroit had a man advantage.

Dave Bolland, playing center on the fourth line again, had a game that left a lot to be desired… until the end. His big hit on Gustav Nyquist led to Brent Seabrook finding open ice and the game-winning goal. The hit was one of four in the game for Bolland, but undoubtedly the biggest.

Seabrook had a bad start to the series, but looked like a different player after Quenneville put him back with Duncan Keith. His performance in Game Seven wasn’t exceptional through much of regulation, even though he led the team with six hits. He struggled to clear the puck a number of times, but was physical whenever a Detroit player got near Crawford.

After seeing his ice time slide to just over 12 minutes in Game Four, Seabrook skated over 23 minutes in each of the Hawks three wins to close out the series.

Seabrook’s performance was aided by Keith, who had a fantastic series. Keith finished the series with four assists and looked like the confident defenseman that won the Norris Trophy in 2010. In the clinching finale against Detroit, Keith was credited with one blocked shot, one hit and one takeaway in almost 27 minutes.

The Hawks best defensive pair in the series should have been credited with the series-winning goal. Niklas Hjalmarsson appeared to score the Hawks’ second goal of the game late in the third, but a terrible call wiped the goal away.

What Brandon Saad did to earn a roughing minor was… land hard on the ice? The call was awful, but it didn’t cost the hawks the game.

With Johnny Oduya, Hjalmarsson continued to skate heavy minutes and contribute to a stellar postseason penalty kill. In the series, the Hawks allowed only one powerplay goal; Chicago carries a 97.6 penalty kill percentage into the Western Conference Finals against the Los Angeles Kings.

Those conference finals will begin on Saturday afternoon.