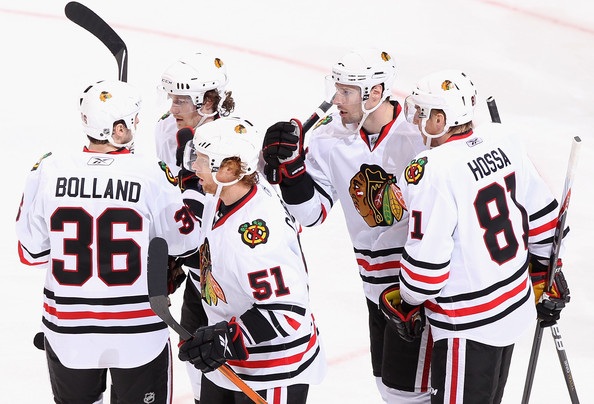 A look at the standings is a distant departure from where the Blackhawks were on Friday night.

After their 5-3 win in St. Louis on Monday afternoon, the Hawks are now tied with four other teams – Los Angeles, Dallas, Minnesota and Anaheim – for seventh place in the Western Conference with 68 points. What is striking about the standings is that the Blackhawks are the only team of those five that is on a winning streak.

It appears, on paper, that the Hawks are (finally) trending in the right direction.

In fact, the Dallas Stars have lost 10 of their last 12, may have officially pushed the panic button on Monday when they dealt left wing James Neal and defenseman Matt Niskanen to the banged-up Pittsburgh Penguins in exchange for defenseman Alex Goligoski. The deal, the second shocker of the last few days (after the Avs-Blues deal from early Saturday morning), is a bold statement from a struggling, hurting Stars team.

What fans got from the Blackhawks was precisely was a rare complete team effort. The five goals were from five different players, two of whom – Viktor Stalberg and Marian Hossa – were desperately trying to find the back of the net. The last time either Hossa or Stalberg had scored a goal was on Feb. 1 at Columbus.

The other three goals for the Blackhawks came from the usual suspects in the last few weeks. Jonathan Toews and Patrick Kane, both of whom scored their 20th goals of the year on Monday, are among the league’s leaders in scoring since the All Star Break. Toews now has 15 points (three goals, 12 assists) and is plus-nine in 10 games in February, while Kane has 13 points (seven goals, six assists) and is plus-five over those same 10 contests.

Dave Bolland scored his 13th goal of the year, which was his ninth point (three goals, six assists) in the last 10 games.

Hossa, Kane and Toews all had one goal and one assists in the game, while Ryan Johnson and Brent Seabrook each contributed two assists. For Johnson, the points were his first in a Blackhawks sweater and came the day after Toews praised him for his shot-blocking in the win over Pittsburgh.

It also appears that the Blackhawks new rotation is paying immediate dividends.

Despite GM Stan Bowman telling the media that he’s shopping for another defenseman, the Blackhawks have clearly made an effort lately to more equally split the ice time across their top five. On Monday, Nick Leddy skated 17:05 and was again fifth among the Hawks defensemen in ice time despite being partnered with Duncan Keith througout the game. Brian Campbell (21:01), Brent Seabrook (20:25) and Niklas Hjalmarsson (20:37) have all seen their ice time coming down in the last couple weeks because of the increased work load from Leddy.

The player most impacted by Leddy’s increased use has been Campbell, whose average ice time per game is down over three minutes per game from January to February.

Tomas Kopecky’s ice time is also trending down, and that’s a good thing. He skated only 8:26 on Monday and didn’t take a single faceoff. Kopecky’s season numbers show that he averages over a full minute less ice time in wins (15:49) than he does in losses (16:52), and his plus-minues is dramatically better with lower ice time (plus-11 in wins, minus-24 in losses).

If the Blackhawks can continue getting an impact from all over the roster as they have in the last two days, they’re in significantly better position to be a player in the postseason this year.